This kind allows only one possible transition for any allowed input. This is like the "if" statement in that if x then doThis else doThat is not possible. The computer must perform one of the two options.

Given some state, an input can lead to more than one different state. 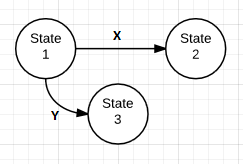 This page was last modified on Jan 13, 2023 by MDN contributors.