The Web Speech API provides two distinct areas of functionality — speech recognition, and speech synthesis (also known as text to speech, or tts) — which open up interesting new possibilities for accessibility, and control mechanisms. This article provides a simple introduction to both areas, along with demos.

Speech recognition involves receiving speech through a device's microphone, which is then checked by a speech recognition service against a list of grammar (basically, the vocabulary you want to have recognized in a particular app.) When a word or phrase is successfully recognized, it is returned as a result (or list of results) as a text string, and further actions can be initiated as a result.

Note: On some browsers, like Chrome, using Speech Recognition on a web page involves a server-based recognition engine. Your audio is sent to a web service for recognition processing, so it won't work offline.

To show simple usage of Web speech recognition, we've written a demo called Speech color changer. When the screen is tapped/clicked, you can say an HTML color keyword, and the app's background color will change to that color. 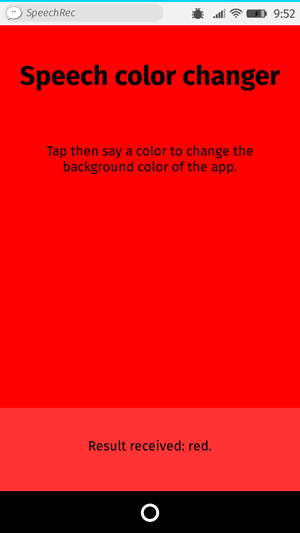 To run the demo, you can clone (or directly download) the Github repo it is part of, open the HTML index file in a supporting desktop browser, or navigate to the live demo URL in a supporting mobile browser like Chrome.

Support for Web Speech API speech recognition is currently limited to Chrome for Desktop and Android — Chrome has supported it since around version 33 but with prefixed interfaces, so you need to include prefixed versions of them, e.g. webkitSpeechRecognition.

The HTML and CSS for the app is really trivial. We have a title, instructions paragraph, and a div into which we output diagnostic messages.

The CSS provides a very simple responsive styling so that it looks OK across devices.

Let's look at the JavaScript in a bit more detail.

As mentioned earlier, Chrome currently supports speech recognition with prefixed properties, therefore at the start of our code we include these lines to feed the right objects to Chrome, and any future implementations that might support the features without a prefix:

The next part of our code defines the grammar we want our app to recognize. The following variable is defined to hold our grammar:

The grammar format used is JSpeech Grammar Format (JSGF) — you can find a lot more about it at the previous link to its spec. However, for now let's just run through it quickly:

Plugging the grammar into our speech recognition

After grabbing references to the output <div> and the HTML element (so we can output diagnostic messages and update the app background color later on), we implement an onclick handler so that when the screen is tapped/clicked, the speech recognition service will start. This is achieved by calling SpeechRecognition.start(). The forEach() method is used to output colored indicators showing what colors to try saying.

The last two handlers are there to handle cases where speech was recognized that wasn't in the defined grammar, or an error occurred. SpeechRecognition.onnomatch seems to be supposed to handle the first case mentioned, although note that at the moment it doesn't seem to fire correctly; it just returns whatever was recognized anyway:

Speech synthesis (aka text-to-speech, or tts) involves receiving synthesising text contained within an app to speech, and playing it out of a device's speaker or audio output connection.

The Web Speech API has a main controller interface for this — SpeechSynthesis — plus a number of closely-related interfaces for representing text to be synthesised (known as utterances), voices to be used for the utterance, etc. Again, most OSes have some kind of speech synthesis system, which will be used by the API for this task as available.

To show simple usage of Web speech synthesis, we've provided a demo called Speak easy synthesis. This includes a set of form controls for entering text to be synthesised, and setting the pitch, rate, and voice to use when the text is uttered. After you have entered your text, you can press Enter/Return to hear it spoken. 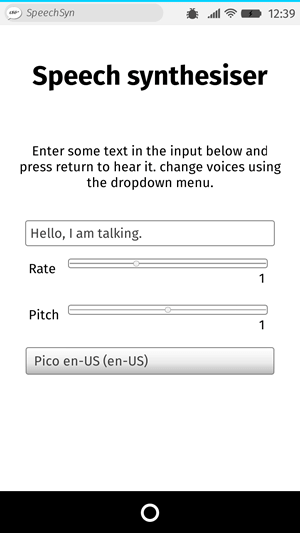 To run the demo, you can clone (or directly download) the Github repo it is part of, open the HTML index file in a supporting desktop browser, or navigate to the live demo URL in a supporting mobile browser like Chrome, or Firefox OS.

Support for Web Speech API speech synthesis is still getting there across mainstream browsers, and is currently limited to the following:

The HTML and CSS are again pretty trivial, containing a title, some instructions for use, and a form with some simple controls. The <select> element is initially empty, but is populated with <option>s via JavaScript (see later on.)

Let's investigate the JavaScript that powers this app.

First of all, we capture references to all the DOM elements involved in the UI, but more interestingly, we capture a reference to Window.speechSynthesis. This is API's entry point — it returns an instance of SpeechSynthesis, the controller interface for web speech synthesis.

We also create data- attributes for each option, containing the name and language of the associated voice, so we can grab them easily later on, and then append the options as children of the select.

When we come to run the function, we do the following. This is because Firefox doesn't support SpeechSynthesis.onvoiceschanged, and will just return a list of voices when SpeechSynthesis.getVoices() is fired. With Chrome however, you have to wait for the event to fire before populating the list, hence the if statement seen below.

Next, we create an event handler to start speaking the text entered into the text field. We are using an onsubmit handler on the form so that the action happens when Enter/Return is pressed. We first create a new SpeechSynthesisUtterance() instance using its constructor — this is passed the text input's value as a parameter.

Next, we need to figure out which voice to use. We use the HTMLSelectElement selectedOptions property to return the currently selected <option> element. We then use this element's data-name attribute, finding the SpeechSynthesisVoice object whose name matches this attribute's value. We set the matching voice object to be the value of the SpeechSynthesisUtterance.voice property.

In the final part of the handler, we include an SpeechSynthesisUtterance.onpause handler to demonstrate how SpeechSynthesisEvent can be put to good use. When SpeechSynthesis.pause() is invoked, this returns a message reporting the character number and name that the speech was paused at.

Finally, we call blur() on the text input. This is mainly to hide the keyboard on Firefox OS.

The last part of the code updates the pitch/rate values displayed in the UI, each time the slider positions are moved.