This article explains some of the audio theory behind how the features of the Web Audio API work, to help you make informed decisions while designing how audio is routed through your app.

It won't turn you into a master sound engineer, but it will give you enough background to understand why the Web Audio API works like it does.

The Web Audio API involves handling audio operations inside an audio context, and has been designed to allow modular routing. Basic audio operations are performed with audio nodes, which are linked together to form an audio routing graph. Several sources — with different types of channel layout — are supported even within a single context. This modular design provides the flexibility to create complex audio functions with dynamic effects.

Audio nodes are linked via their inputs and outputs, forming a chain that starts with one or more sources, goes through one or more nodes, then ends up at a destination. Although, you don't have to provide a destination if you, say, just want to visualize some audio data. A simple, typical workflow for web audio would look something like this:

Note: The number of audio channels available on a signal is frequently presented in a numeric format, such as 2.0 or 5.1. This is called channel notation. The first number is the number of full frequency range audio channels that the signal includes. The number after the period indicates the number of those channels which are reserved for low-frequency effect (LFE) outputs; these are often referred to as subwoofers.

Each input or output is composed of one or more audio channels, which together represent a specific audio layout. Any discrete channel structure is supported, including mono, stereo, quad, 5.1, and so on. 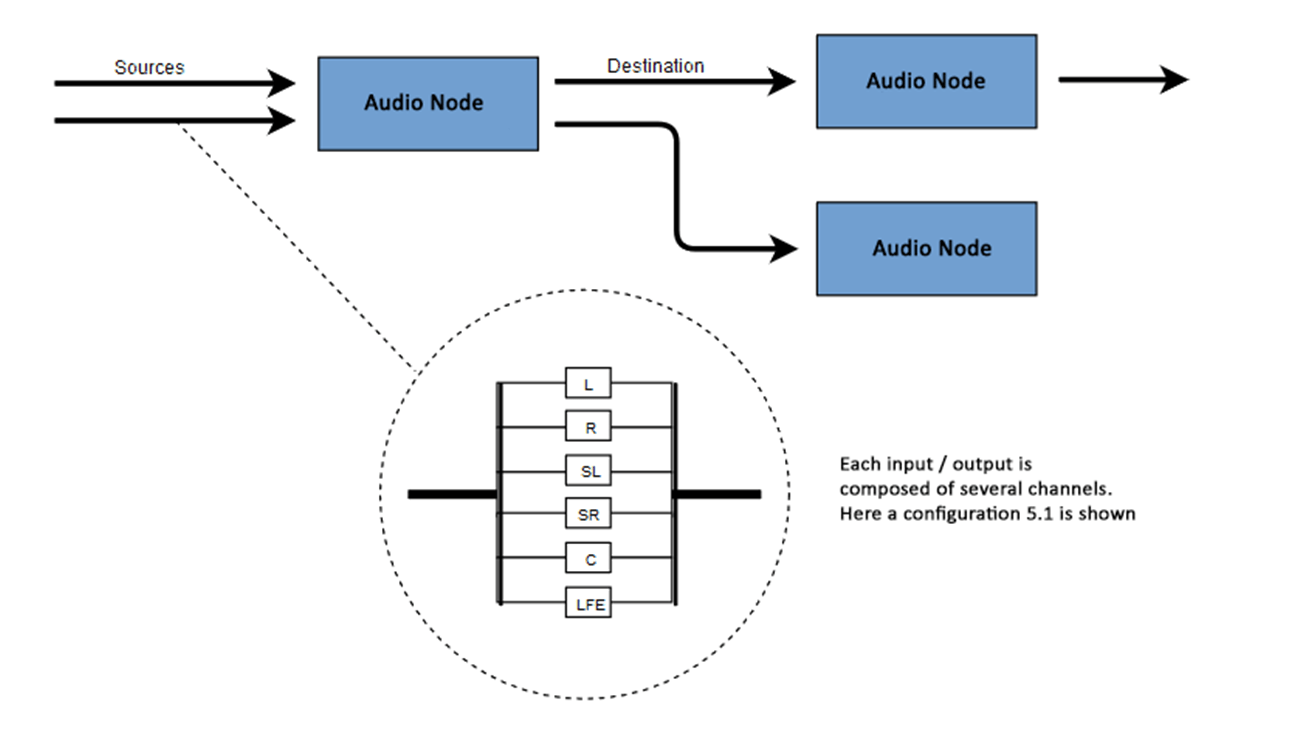 Audio sources can be obtained in a number of ways:

Audio data: what's in a sample

When an audio signal is processed, sampling means the conversion of a continuous signal to a discrete signal; or put another way, a continuous sound wave, such as a band playing live, is converted to a sequence of samples (a discrete-time signal) that allow a computer to handle the audio in distinct blocks.

A lot more information can be found on the Wikipedia page Sampling (signal processing).

The sample rate is the number of those samples (or frames, since all samples of a frame play at the same time) that will play in one second, measured in Hz. The higher the sample rate, the better the sound quality.

Let's look at a Mono and a Stereo audio buffer, each is one second long, and playing at 44100Hz:

When a buffer plays, you will hear the left most sample frame, and then the one right next to it, etc. In the case of stereo, you will hear both channels at the same time. Sample frames are very useful, because they are independent of the number of channels, and represent time, in a useful way for doing precise audio manipulation.

Here's a couple of simple examples:

If you use this call above, you will get a stereo buffer with two channels, that when played back on an AudioContext running at 44100Hz (very common, most normal sound cards run at this rate), will last for 0.5 seconds: 22050 frames/44100Hz = 0.5 seconds.

Note: Audio resampling is very similar to image resizing. Say you've got a 16 x 16 image, but you want it to fill a 32x32 area. You resize (or resample) it. The result has less quality (it can be blurry or edgy, depending on the resizing algorithm), but it works, with the resized image taking up less space. Resampled audio is exactly the same: you save space, but in practice you will be unable to properly reproduce high frequency content, or treble sound.

The Web Audio API uses a planar buffer format. The left and right channels are stored like this:

This is very common in audio processing: it makes it easy to process each channel independently.

The alternative is to use an interleaved buffer format:

This format is very common for storing and playing back audio without much processing, for example a decoded MP3 stream.

The Web Audio API exposes only planar buffers, because it's made for processing. It works with planar, but converts the audio to interleaved when it is sent to the sound card for playback. Conversely, when an MP3 is decoded, it starts off in interleaved format, but is converted to planar for processing.

Different audio buffers contain different numbers of channels: from the more basic mono (only one channel) and stereo (left and right channels), to more complex sets like quad and 5.1, which have different sound samples contained in each channel, leading to a richer sound experience. The channels are usually represented by standard abbreviations detailed in the table below:

When the number of channels doesn't match between an input and an output, up- or down-mixing happens according the following rules. This can be somewhat controlled by setting the AudioNode.channelInterpretation property to speakers or discrete:

In general, audio visualizations are achieved by accessing an output of audio data over time, usually gain or frequency data, and then using a graphical technology to turn that into a visual output, such as a graph. The Web Audio API has an AnalyserNode available that doesn't alter the audio signal passing through it. Instead it outputs audio data that can be passed to a visualization technology such as <canvas>.

You can grab data using the following methods:

Copies the current frequency data into a Float32Array array passed into it.

Copies the current frequency data into a Uint8Array (unsigned byte array) passed into it.

Copies the current waveform, or time-domain, data into a Float32Array array passed into it.

Copies the current waveform, or time-domain, data into a Uint8Array (unsigned byte array) passed into it.

An audio spatialisation (handled by the PannerNode and AudioListener nodes in the Web Audio API) allows us to model the position and behavior of an audio signal at a certain point in space, and the listener hearing that audio.

The panner's position is described with right-hand Cartesian coordinates; its movement using a velocity vector, necessary for creating Doppler effects, and its directionality using a directionality cone.The cone can be very large, e.g. for omnidirectional sources.

In audio terms, fan-in describes the process by which a ChannelMergerNode takes a series of mono input sources and outputs a single multi-channel signal: