The AudioNode interface is a generic interface for representing an audio processing module.

Note: An AudioNode can be target of events, therefore it implements the EventTarget interface. 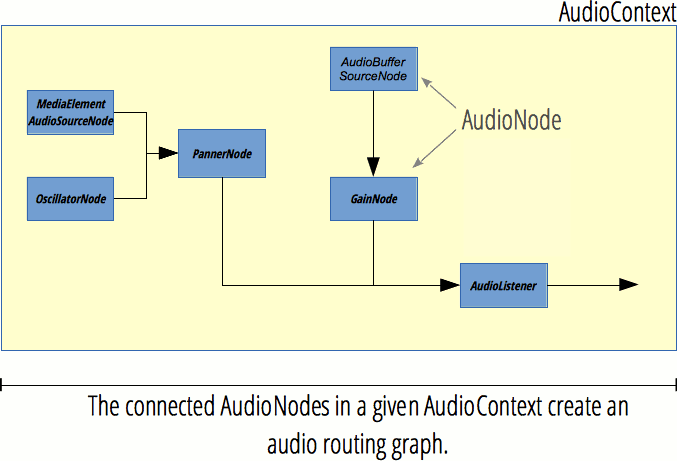 Each AudioNode has inputs and outputs, and multiple audio nodes are connected to build a processing graph. This graph is contained in an AudioContext, and each audio node can only belong to one audio context.

A source node has zero inputs but one or multiple outputs, and can be used to generate sound. On the other hand, a destination node has no outputs; instead, all its inputs are directly played back on the speakers (or whatever audio output device the audio context uses). In addition, there are processing nodes which have inputs and outputs. The exact processing done varies from one AudioNode to another but, in general, a node reads its inputs, does some audio-related processing, and generates new values for its outputs, or lets the audio pass through (for example in the AnalyserNode, where the result of the processing is accessed separately).

The more nodes in a graph, the higher the latency will be. For example, if your graph has a latency of 500ms, when the source node plays a sound, it will take half a second until that sound can be heard on your speakers (or even longer because of latency in the underlying audio device). Therefore, if you need to have interactive audio, keep the graph as small as possible, and put user-controlled audio nodes at the end of a graph. For example, a volume control (GainNode) should be the last node so that volume changes take immediate effect.

For a list of all audio nodes, see the Web Audio API homepage.

There are two ways to create an AudioNode: via the constructor and via the factory method.

You are free to use either constructors or factory methods, or mix both, however there are advantages to using the constructors:

Returns the associated BaseAudioContext, that is the object representing the processing graph the node is participating in.

Returns the number of inputs feeding the node. Source nodes are defined as nodes having a numberOfInputs property with a value of 0.

Returns the number of outputs coming out of the node. Destination nodes — like AudioDestinationNode — have a value of 0 for this attribute.

Represents an integer used to determine how many channels are used when up-mixing and down-mixing connections to any inputs to the node. Its usage and precise definition depend on the value of AudioNode.channelCountMode.

Represents an enumerated value describing the way channels must be matched between the node's inputs and outputs.

Represents an enumerated value describing the meaning of the channels. This interpretation will define how audio up-mixing and down-mixing will happen. The possible values are "speakers" or "discrete".

Allows us to connect the output of this node to be input into another node, either as audio data or as the value of an AudioParam.

Allows us to disconnect the current node from another one it is already connected to.

This simple snippet of code shows the creation of some audio nodes, and how the AudioNode properties and methods can be used. You can find examples of such usage on any of the examples linked to on the Web Audio API landing page (for example Violent Theremin).