The HTMLElement.offsetWidth read-only property returns the layout width of an element as an integer.

Typically, offsetWidth is a measurement in pixels of the element's CSS width, including any borders, padding, and vertical scrollbars (if rendered). It does not include the width of pseudo-elements such as ::before or ::after.

If the element is hidden (for example, by setting style.display on the element or one of its ancestors to "none"), then 0 is returned.

Note: This property will round the value to an integer. If you need a fractional value, use element.getBoundingClientRect(). 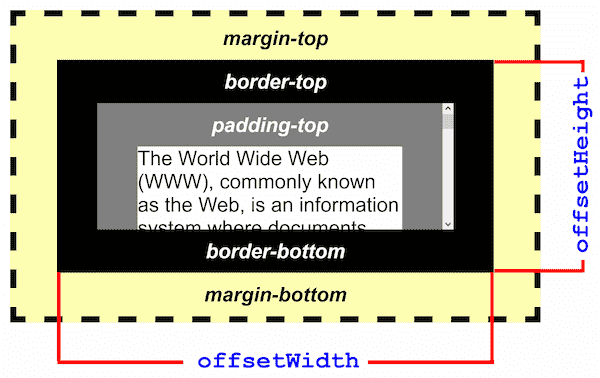 offsetWidth is a property of the DHTML object model which was first introduced by MSIE. It is sometimes referred to as an element's physical/graphical dimensions, or an element's border-box width.