Flexbox is a one-dimensional layout method for arranging items in rows or columns. Items flex (expand) to fill additional space or shrink to fit into smaller spaces. This article explains all the fundamentals.

For a long time, the only reliable cross-browser compatible tools available for creating CSS layouts were features like floats and positioning. These work, but in some ways they're also limiting and frustrating.

The following simple layout designs are either difficult or impossible to achieve with such tools in any kind of convenient, flexible way:

As you'll see in subsequent sections, flexbox makes a lot of layout tasks much easier. Let's dig in!

In this article, you'll work through a series of exercises to help you understand how flexbox works. To get started, you should make a local copy of the first starter file — flexbox0.html from our github repo. Load it in a modern browser (like Firefox or Chrome) and have a look at the code in your code editor. You can also see it live here. 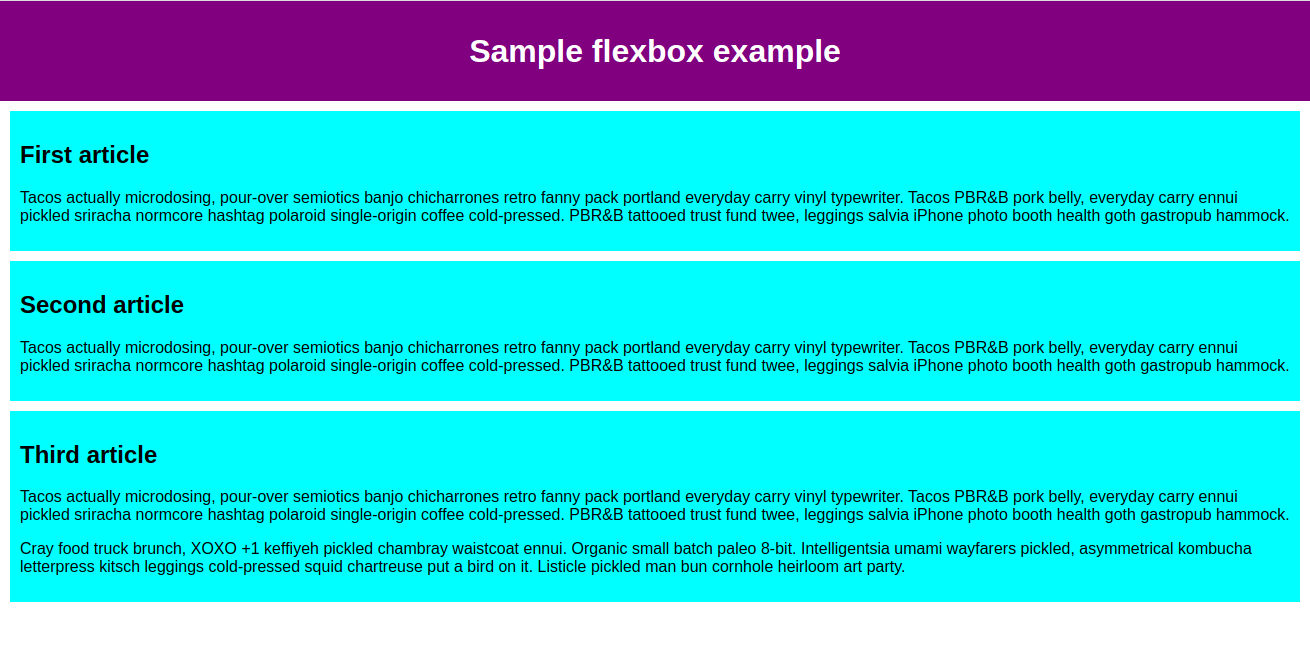 You'll see that we have a <header> element with a top level heading inside it and a <section> element containing three <article>s. We're going to use these to create a fairly standard three column layout.

Specifying what elements to lay out as flexible boxes

To start with, we need to select which elements are to be laid out as flexible boxes. To do this, we set a special value of display on the parent element of the elements you want to affect. In this case we want to lay out the <article> elements, so we set this on the <section>:

This causes the <section> element to become a flex container and its children to become flex items. The result of this should be something like so:

So, this single declaration gives us everything we need. Incredible, right? We have our multiple column layout with equal-sized columns, and the columns are all the same height. This is because the default values given to flex items (the children of the flex container) are set up to solve common problems such as this.

To be clear, let's reiterate what is happening here. The element we've given a display value of flex to is acting like a block-level element in terms of how it interacts with the rest of the page, but its children are laid out as flex items. The next section will explain in more detail what this means. Note also that you can use a display value of inline-flex if you wish to lay out an element's children as flex items, but have that element behave like an inline element. 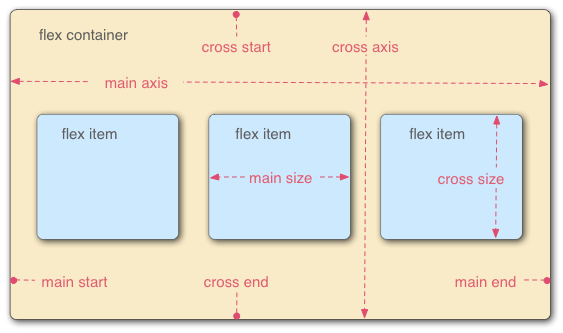 Bear this terminology in mind as you go through subsequent sections. You can always refer back to it if you get confused about any of the terms being used.

Try adding the following declaration to your <section> rule:

You'll see that this puts the items back in a column layout, much like they were before we added any CSS. Before you move on, delete this declaration from your example.

Note: You can also lay out flex items in a reverse direction using the row-reverse and column-reverse values. Experiment with these values too!

One issue that arises when you have a fixed width or height in your layout is that eventually your flexbox children will overflow their container, breaking the layout. Have a look at our flexbox-wrap0.html example and try viewing it live (take a local copy of this file now if you want to follow along with this example):

Here we see that the children are indeed breaking out of their container. One way in which you can fix this is to add the following declaration to your <section> rule:

Also, add the following declaration to your <article> rule:

Try this now. You'll see that the layout looks much better with this included: 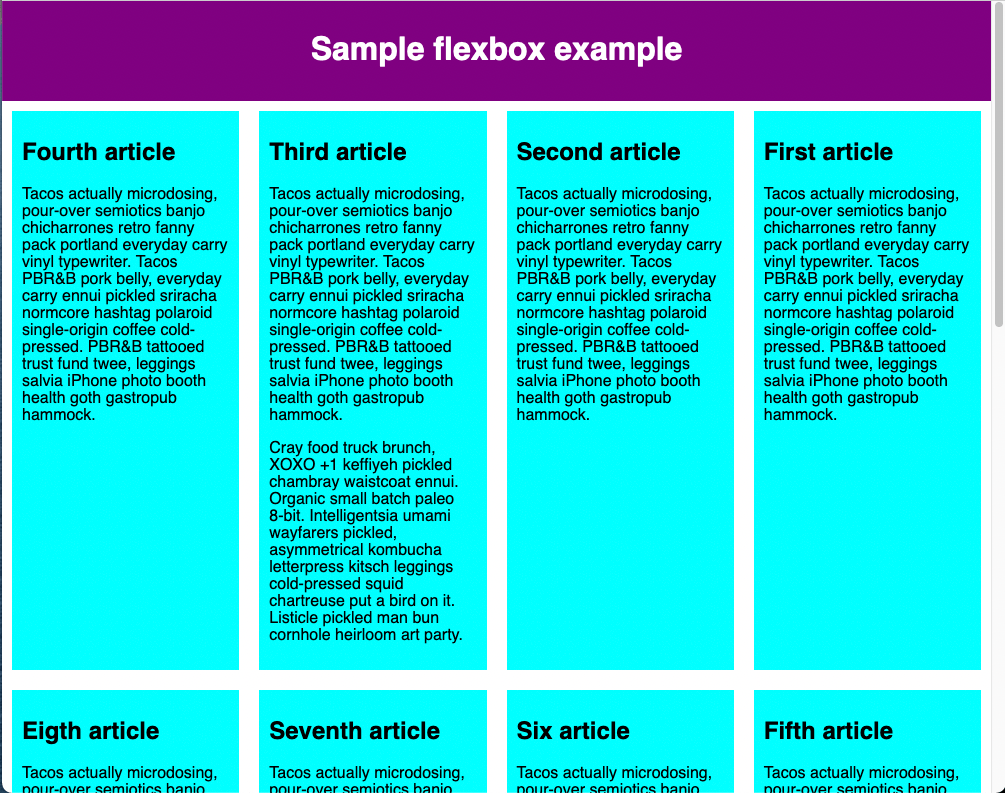 We now have multiple rows. Each row has as many flexbox children fitted into it as is sensible. Any overflow is moved down to the next line. The flex: 200px declaration set on the articles means that each will be at least 200px wide. We'll discuss this property in more detail later on. You might also notice that the last few children on the last row are each made wider so that the entire row is still filled.

But there's more we can do here. First of all, try changing your flex-direction property value to row-reverse. Now you'll see that you still have your multiple row layout, but it starts from the opposite corner of the browser window and flows in reverse.

At this point it's worth noting that a shorthand exists for flex-direction and flex-wrap: flex-flow. So, for example, you can replace

Let's now return to our first example and look at how we can control what proportion of space flex items take up compared to the other flex items. Fire up your local copy of flexbox0.html, or take a copy of flexbox1.html as a new starting point (see it live).

First, add the following rule to the bottom of your CSS:

This is a unitless proportion value that dictates how much available space along the main axis each flex item will take up compared to other flex items. In this case, we're giving each <article> element the same value (a value of 1), which means they'll all take up an equal amount of the spare space left after properties like padding and margin have been set. This value is proportionally shared among the flex items: giving each flex item a value of 400000 would have exactly the same effect.

Now add the following rule below the previous one:

You can also specify a minimum size value within the flex value. Try updating your existing article rules like so:

The real value of flexbox can be seen in its flexibility/responsiveness. If you resize the browser window or add another <article> element, the layout continues to work just fine.

flex is a shorthand property that can specify up to three different values:

We'd advise against using the longhand flex properties unless you really have to (for example, to override something previously set). They lead to a lot of extra code being written, and they can be somewhat confusing.

You can also use flexbox features to align flex items along the main or cross axis. Let's explore this by looking at a new example: flex-align0.html (see it live also). We're going to turn this into a neat, flexible button/toolbar. At the moment you'll see a horizontal menu bar with some buttons jammed into the top left-hand corner.

First, take a local copy of this example.

Now, add the following to the bottom of the example's CSS:

Refresh the page and you'll see that the buttons are now nicely centered horizontally and vertically. We've done this via two new properties.

align-items controls where the flex items sit on the cross axis.

You can override the align-items behavior for individual flex items by applying the align-self property to them. For example, try adding the following to your CSS:

Have a look at what effect this has and remove it again when you've finished.

justify-content controls where the flex items sit on the main axis.

We'd like to encourage you to play with these values to see how they work before you continue.

Flexbox also has a feature for changing the layout order of flex items without affecting the source order. This is another thing that is impossible to do with traditional layout methods.

The code for this is simple. Try adding the following CSS to your button bar example code:

Refresh and you'll see that the "Smile" button has moved to the end of the main axis. Let's talk about how this works in a bit more detail:

You can set negative order values to make items appear earlier than items whose value is 0. For example, you could make the "Blush" button appear at the start of the main axis using the following rule:

It's possible to create some pretty complex layouts with flexbox. It's perfectly OK to set a flex item to also be a flex container, so that its children are also laid out like flexible boxes. Have a look at complex-flexbox.html (see it live also).

The HTML for this is fairly simple. We've got a <section> element containing three <article>s. The third <article> contains three <div>s, and the first <div> contains five <button>s :

Let's look at the code we've used for the layout.

First of all, we set the children of the <section> to be laid out as flexible boxes.

Next, we set some flex values on the <article>s themselves. Take special note of the second rule here: we're setting the third <article> to have its children laid out like flex items too, but this time we're laying them out like a column.

Next, we select the first <div>. We first use flex: 1 100px; to effectively give it a minimum height of 100px, then we set its children (the <button> elements) to also be laid out like flex items. Here we lay them out in a wrapping row and align them in the center of the available space as we did with the individual button example we saw earlier.

Finally, we set some sizing on the button. This time by giving it a flex value of 1 auto. This has a very interesting effect, which you'll see if you try resizing your browser window width. The buttons will take up as much space as they can. As many will fit on a line as is comfortable; beyond that, they'll drop to a new line.

Flexbox support is available in most new browsers: Firefox, Chrome, Opera, Microsoft Edge, and IE 11, newer versions of Android/iOS, etc. However, you should be aware that there are still older browsers in use that don't support Flexbox (or do, but support a really old, out-of-date version of it.)

While you're just learning and experimenting, this doesn't matter too much; however, if you're considering using flexbox in a real website, you need to do testing and make sure that your user experience is still acceptable in as many browsers as possible.

Flexbox is a bit trickier than some CSS features. For example, if a browser is missing a CSS drop shadow, then the site will likely still be usable. Not supporting flexbox features, however, will probably break a layout completely, making it unusable.

We've covered a lot in this article, but can you remember the most important information? You can find some further tests to verify that you've retained this information before you move on: see Test your skills: Flexbox.

That concludes our tour of the basics of Flexbox. We hope you had fun and will have a good play around with it as you proceed further with your learning. Next, we'll have a look at another important aspect of CSS layouts: CSS Grids.