HTTP messages are how data is exchanged between a server and a client. There are two types of messages: requests sent by the client to trigger an action on the server, and responses, the answer from the server.

HTTP messages are composed of textual information encoded in ASCII, and span over multiple lines. In HTTP/1.1, and earlier versions of the protocol, these messages were openly sent across the connection. In HTTP/2, the once human-readable message is now divided up into HTTP frames, providing optimization and performance improvements.

Web developers, or webmasters, rarely craft these textual HTTP messages themselves: software, a Web browser, proxy, or Web server, perform this action. They provide HTTP messages through config files (for proxies or servers), APIs (for browsers), or other interfaces.

The HTTP/2 binary framing mechanism has been designed to not require any alteration of the APIs or config files applied: it is broadly transparent to the user.

HTTP requests, and responses, share similar structure and are composed of:

The start-line and HTTP headers of the HTTP message are collectively known as the head of the requests, whereas its payload is known as the body.

HTTP requests are messages sent by the client to initiate an action on the server. Their start-line contain three elements:

HTTP headers from a request follow the same basic structure of an HTTP header: a case-insensitive string followed by a colon (':') and a value whose structure depends upon the header. The whole header, including the value, consist of one single line, which can be quite long.

Many different headers can appear in requests. They can be divided in several groups:

The final part of the request is its body. Not all requests have one: requests fetching resources, like GET, HEAD, DELETE, or OPTIONS, usually don't need one. Some requests send data to the server in order to update it: as often the case with POST requests (containing HTML form data).

Bodies can be broadly divided into two categories:

The start line of an HTTP response, called the status line, contains the following information:

HTTP headers for responses follow the same structure as any other header: a case-insensitive string followed by a colon (':') and a value whose structure depends upon the type of the header. The whole header, including its value, presents as a single line.

Many different headers can appear in responses. These can be divided into several groups:

The last part of a response is the body. Not all responses have one: responses with a status code that sufficiently answers the request without the need for corresponding payload (like 201 Created or 204 No Content) usually don't.

Bodies can be broadly divided into three categories:

HTTP/1.x messages have a few drawbacks for performance:

HTTP/2 introduces an extra step: it divides HTTP/1.x messages into frames which are embedded in a stream. Data and header frames are separated, which allows header compression. Several streams can be combined together, a process called multiplexing, allowing more efficient use of underlying TCP connections. 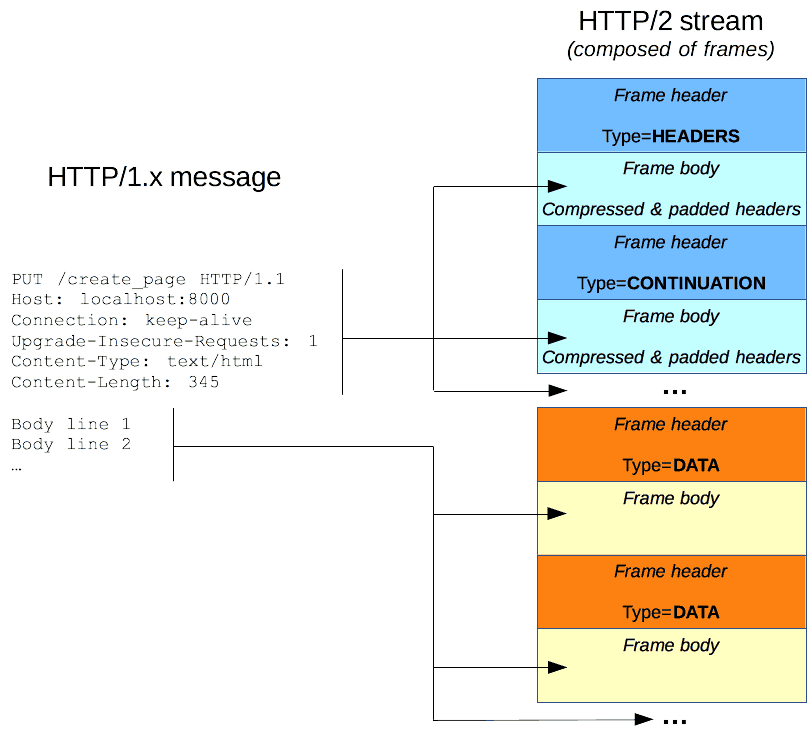 HTTP frames are now transparent to Web developers. This is an additional step in HTTP/2, between HTTP/1.1 messages and the underlying transport protocol. No changes are needed in the APIs used by Web developers to utilize HTTP frames; when available in both the browser and the server, HTTP/2 is switched on and used.

HTTP messages are the key in using HTTP; their structure is simple, and they are highly extensible. The HTTP/2 framing mechanism adds a new intermediate layer between the HTTP/1.x syntax and the underlying transport protocol, without fundamentally modifying it: building upon proven mechanisms.