Native messaging enables an extension to exchange messages with a native application, installed on the user's computer. The native messaging serves the extensions without additional accesses over the web.

The extension must request the "nativeMessaging" permission or optional permission in the manifest.json file. Also, the native application must grant permission for the extension by including the ID in the "allowed_extensions" field of the app manifest. 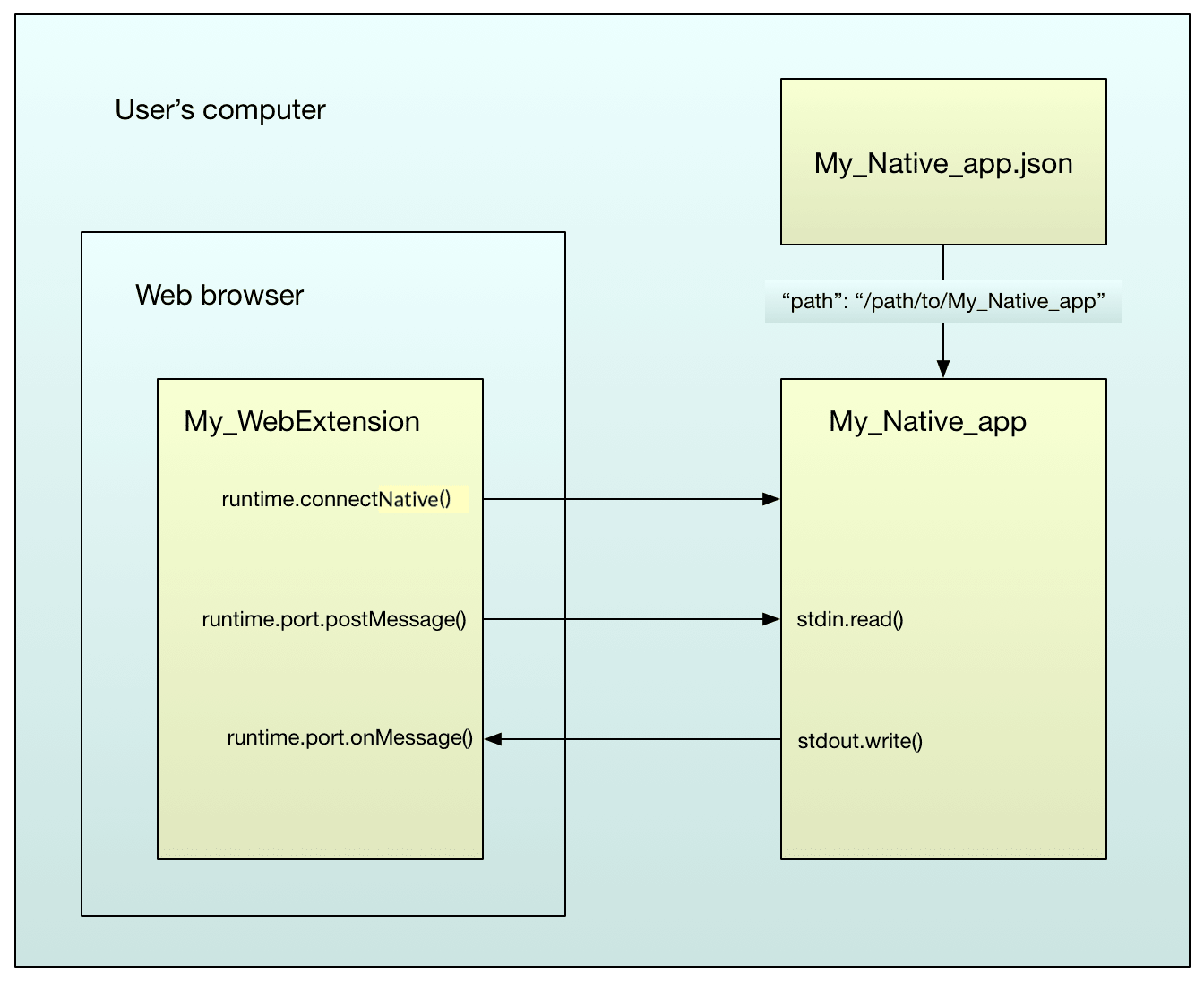 Support for native messaging in extensions is mostly compatible with Chrome, with two main differences:

There's a complete example in the "native-messaging" directory of the "webextensions-examples" repository on GitHub. Most example code in this article is taken from that example.

Extension communicating with a native application:

Note: Chrome does not support the browser_specific_settings key. You will need to use another manifest without this key to install an equivalent WebExtension on Chrome. See Chrome incompatibilities below.

Note: When using optional permission, check that permission has been granted and, where necessary, request permission from the user with the permissions API before communicating with the native application.

The app manifest describes to the browser how it can connect to the native application.

For example, here's a manifest for the "ping_pong" native application:

This allows the extension whose ID is "ping_pong@example.org" to connect, by passing the name "ping_pong" into the relevant runtime API function. The application itself is at "/path/to/native-messaging/app/ping_pong.py".

Note: Chrome identifies allowed extensions with another key: allowed_origins, using the ID of the WebExtension. Refer to Chrome documentation for more details and see Chrome incompatibilities below.

As an example, you can also refer to the readme on the native messaging extension on GitHub. If you want to check your local setup after having forked this repository on a Windows machine, you may run check_config_win.py to troubleshoot some issues.

In the example above, the native application is a Python script. It can be difficult to get Windows to run Python scripts reliably in this way, so an alternative is to provide a .bat file, and link to that from the application's manifest:

(See note above about Chrome compatibility regarding the allowed_extensions key and its counterpart in Chrome).

The batch file then invokes the Python script:

The browser finds the extension based on registry keys which are located in a specific location. You need to add them either programmatically with your final application or manually if you are using the example from GitHub. For more details, refer to Manifest location.

Following with the ping_pong example, if using Firefox (see this page for Chrome), two registry entries should be created for the messaging to work:

Note: If you base your work on the example located on GitHub, please read this part of the readme and check the output of check_config_win.py before installing the WebExtension on your browser.

Given the above setup, an extension can exchange JSON messages with a native application.

Native messaging cannot directly be used in content scripts. You must do it indirectly via background scripts.

There are two patterns to use here: connection-based messaging and connectionless messaging.

With this pattern you call runtime.connectNative(), passing the name of the application (the value of the "name" property in the app's manifest). This launches the application if it is not already running and returns a runtime.Port object to the extension.

Two arguments are passed to the native app when it starts:

The application stays running until the extension calls Port.disconnect() or the page that connected to it is closed.

Here's an example background script that establishes a connection with the "ping_pong" app, listens for messages from it, then sends it a "ping" message whenever the user clicks the browser action:

With this pattern you call runtime.sendNativeMessage(), passing it:

A new instance of the app is created for each message. The app passes two arguments when starting:

The first message sent by the app is treated as a response to the sendNativeMessage() call, and will be passed into the callback.

Here's the example above, rewritten to use runtime.sendNativeMessage():

On the application side, you use standard input to receive messages and standard output to send them.

Each message is serialized using JSON, UTF-8 encoded and is preceded with a 32-bit value containing the message length in native byte order.

You can quickly get started sending and receiving messages with this NodeJS code:

Here's another example written in Python. It listens for messages from the extension. Note that the file has to be executable on Linux. If the message is "ping", then it responds with a message "pong".

This is the Python 2 version:

In Python 3, the received binary data must be decoded into a string. The content to be sent back to the addon must be encoded into binary data using a struct:

To close the native application:

If you haven't managed to run the application, you should see an error message giving you a clue about the problem.

There are a number of differences between browsers that affect native messaging in web extensions, including the arguments passed to the native app, location of the manifest file, etc. These differences are discussed in Chrome incompatibilities > Native messaging.