Fetching data from the server

Another very common task in modern websites and applications is retrieving individual data items from the server to update sections of a webpage without having to load an entire new page. This seemingly small detail has had a huge impact on the performance and behavior of sites, so in this article, we'll explain the concept and look at technologies that make it possible: in particular, the Fetch API.

What is the problem here?

This model works perfectly well for many sites. But consider a website that's very data-driven. For example, a library website like the Vancouver Public Library. Among other things you could think of a site like this as a user interface to a database. It might let you search for a particular genre of book, or might show you recommendations for books you might like, based on books you've previously borrowed. When you do this, it needs to update the page with the new set of books to display. But note that most of the page content — including items like the page header, sidebar, and footer — stays the same.

The trouble with the traditional model here is that we'd have to fetch and load the entire page, even when we only need to update one part of it. This is inefficient and can result in a poor user experience.

So instead of the traditional model, many websites use JavaScript APIs to request data from the server and update the page content without a page load. So when the user searches for a new product, the browser only requests the data which is needed to update the page — the set of new books to display, for instance.

The main API here is the Fetch API. This enables JavaScript running in a page to make an HTTP request to a server to retrieve specific resources. When the server provides them, the JavaScript can use the data to update the page, typically by using DOM manipulation APIs. The data requested is often JSON, which is a good format for transferring structured data, but can also be HTML or just text.

This is a common pattern for data-driven sites such as Amazon, YouTube, eBay, and so on. With this model:

Note: In the early days, this general technique was known as Asynchronous JavaScript and XML (Ajax), because it tended to request XML data. This is normally not the case these days (you'd be more likely to request JSON), but the result is still the same, and the term "Ajax" is still often used to describe the technique.

To speed things up even further, some sites also store assets and data on the user's computer when they are first requested, meaning that on subsequent visits they use the local versions instead of downloading fresh copies every time the page is first loaded. The content is only reloaded from the server when it has been updated.

Let's walk through a couple of examples of the Fetch API.

For this example, we'll request data out of a few different text files and use them to populate a content area.

This series of files will act as our fake database; in a real application, we'd be more likely to use a server-side language like PHP, Python, or Node to request our data from a database. Here, however, we want to keep it simple and concentrate on the client-side part of this.

To begin this example, make a local copy of fetch-start.html and the four text files — verse1.txt, verse2.txt, verse3.txt, and verse4.txt — in a new directory on your computer. In this example, we will fetch a different verse of the poem (which you may well recognize) when it's selected in the drop-down menu.

Just inside the <script> element, add the following code. This stores references to the <select> and <pre> elements and adds a listener to the <select> element, so that when the user selects a new value, the new value is passed to function named updateDisplay() as a parameter.

Let's define our updateDisplay() function. First of all, put the following beneath your previous code block — this is the empty shell of the function.

We'll start our function by constructing a relative URL pointing to the text file we want to load, as we'll need it later. The value of the <select> element at any time is the same as the text inside the selected <option> (unless you specify a different value in a value attribute) — so for example "Verse 1". The corresponding verse text file is "verse1.txt", and is in the same directory as the HTML file, therefore just the file name will do.

However, web servers tend to be case sensitive, and the file name doesn't have a space in it. To convert "Verse 1" to "verse1.txt" we need to convert the V to lower case, remove the space, and add .txt on the end. This can be done with replace(), toLowerCase(), and string concatenation. Add the following lines inside your updateDisplay() function:

Finally we're ready to use the Fetch API:

There's quite a lot to unpack in here.

First, the entry point to the Fetch API is a global function called fetch(), that takes the URL as a parameter (it takes another optional parameter for custom settings, but we're not using that here).

Next, fetch() is an asynchronous API which returns a Promise. If you don't know what that is, read the module on asynchronous JavaScript, and in particular the article on promises, then come back here. You'll find that article also talks about the fetch() API!

So because fetch() returns a promise, we pass a function into the then() method of the returned promise. This method will be called when the HTTP request has received a response from the server. In the handler, we check that the request succeeded, and throw an error if it didn't. Otherwise, we call response.text(), to get the response body as text.

It turns out that response.text() is also asynchronous, so we return the promise it returns, and pass a function into the then() method of this new promise. This function will be called when the response text is ready, and inside it we will update our <pre> block with the text.

Finally, we chain a catch() handler at the end, to catch any errors thrown in either of the asynchronous functions we called or their handlers.

One problem with the example as it stands is that it won't show any of the poem when it first loads. To fix this, add the following two lines at the bottom of your code (just above the closing </script> tag) to load verse 1 by default, and make sure the <select> element always shows the correct value:

Serving your example from a server

Modern browsers will not run HTTP requests if you just run the example from a local file. This is because of security restrictions (for more on web security, read Website security).

To get around this, we need to test the example by running it through a local web server. To find out how to do this, read our guide to setting up a local testing server.

In this example we have created a sample site called The Can Store — it's a fictional supermarket that only sells canned goods. You can find this example live on GitHub, and see the source code. 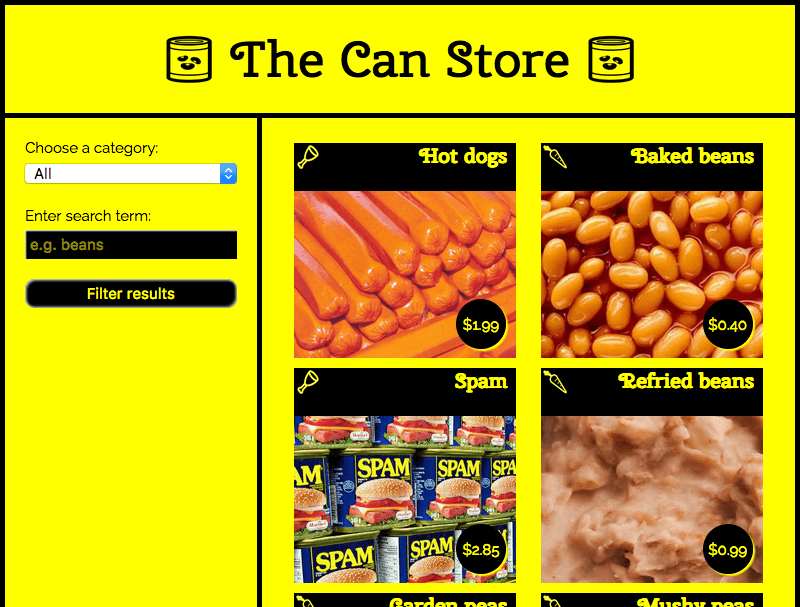 By default, the site displays all the products, but you can use the form controls in the left-hand column to filter them by category, or search term, or both.

There is quite a lot of complex code that deals with filtering the products by category and search terms, manipulating strings so the data displays correctly in the UI, etc. We won't discuss all of it in the article, but you can find extensive comments in the code (see can-script.js).

We will, however, explain the Fetch code.

The first block that uses Fetch can be found at the start of the JavaScript:

The fetch() function returns a promise. If this completes successfully, the function inside the first .then() block contains the response returned from the network.

Inside this function we:

Next we pass a function into the then() method of that returned promise. This function will be passed an object containing the response data as JSON, which we pass into the initialize() function. This function which starts the process of displaying all the products in the user interface.

To handle errors, we chain a .catch() block onto the end of the chain. This runs if the promise fails for some reason. Inside it, we include a function that is passed as a parameter, an err object. This err object can be used to report the nature of the error that has occurred, in this case we do it with a simple console.log().

However, a complete website would handle this error more gracefully by displaying a message on the user's screen and perhaps offering options to remedy the situation, but we don't need anything more than a simple console.error().

You can test the failure case yourself:

The second Fetch block can be found inside the fetchBlob() function:

This works in much the same way as the previous one, except that instead of using json(), we use blob(). In this case we want to return our response as an image file, and the data format we use for that is Blob (the term is an abbreviation of "Binary Large Object" and can basically be used to represent large file-like objects, such as images or video files).

Once we've successfully received our blob, we pass it into our showProduct() function, which displays it.

Sometimes, especially in older code, you'll see another API called XMLHttpRequest (often abbreviated as "XHR") used to make HTTP requests. This predated Fetch, and was really the first API widely used to implement AJAX. We recommend you use Fetch if you can: it's a simpler API and has more features than XMLHttpRequest. We won't go through an example that uses XMLHttpRequest, but we will show you what the XMLHttpRequest version of our first can store request would look like:

There are five stages to this:

We also have to wrap the whole thing in the try...catch block, to handle any errors thrown by open() or send().

Hopefully you think the Fetch API is an improvement over this. In particular, see how we have to handle errors in two different places.

This article shows how to start working with Fetch to fetch data from the server.

There are however a lot of different subjects discussed in this article, which has only really scratched the surface. For a lot more detail on these subjects, try the following articles: