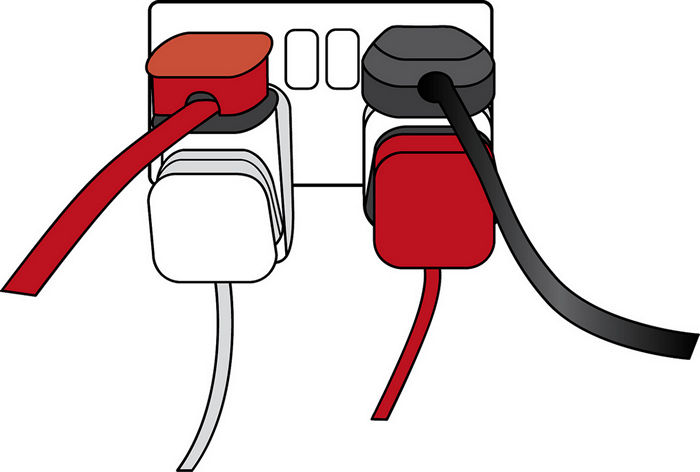 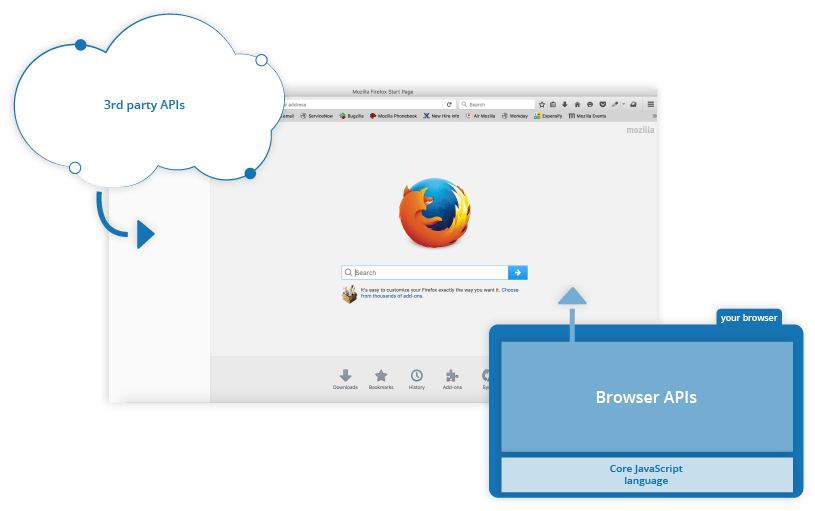 Nota: If you are not already familiar with how objects work, you should go back and work through our JavaScript objects module before continuing.

Let's return to the example of the Geolocation API — this is a very simple API that consists of a few simple objects:

So how do these objects interact? If you look at our maps-example.html example (see it live also), you'll see the following code:

Nota: When you first load up the above example, you should be given a dialog box asking if you are happy to share your location with this application (see the They have additional security mechanisms where appropriate section later in the article). You need to agree to this to be able to plot your location on the map. If you still can't see the map, you may need to set your permissions manually; you can do this in various ways depending on what browser you are using; for example in Firefox go to > Tools > Page Info > Permissions, then change the setting for Share Location; in Chrome go to Settings > Privacy > Show advanced settings > Content settings then change the settings for Location.

We first want to use the Geolocation.getCurrentPosition() method to return the current location of our device. The browser's Geolocation object is accessed by calling the Navigator.geolocation property, so we start off by using

But we can use the dot syntax to chain our property/method access together, reducing the number of lines we have to write.

Nota: A function that is taken by another function as an argument is called a callback function.

This pattern of invoking a function only when an operation has been completed is very common in JavaScript APIs — making sure one operation has completed before trying to use the data the operation returns in another operation. These are called asynchronous operations. Because getting the device's current position relies on an external component (the device's GPS or other geolocation hardware), we can't guarantee that it will be done in time to just immediately use the data it returns. Therefore, something like this wouldn't work:

If the first line had not yet returned its result, the second line would throw an error, because the position data would not yet be available. For this reason, APIs involving asynchronous operations are designed to use callback functions, or the more modern system of Promises, which were made available in ECMAScript 6 and are widely used in newer APIs.

We are combining the Geolocation API with a third party API — the Google Maps API — which we are using to plot the location returned by getCurrentPosition() on a Google Map. We make this API available on our page by linking to it — you'll find this line in the HTML:

This object is itself set as the value of the center property of an options object that we've called myOptions. We then create an object instance to represent our map by calling the google.maps.Map() constructor, passing it two parameters — a reference to the <div> element we want to render the map on (with an ID of map_canvas), and the options object we defined just above it.

With this done, our map now renders.

This last block of code highlights two common patterns you'll see across many APIs. First of all, API objects commonly contain constructors, which are invoked to create instances of those objects that you'll use to write your program. Second, API objects often have several options available that can be tweaked to get the exact environment you want for your program. API constructors commonly accept options objects as parameters, which is where you'd set such options.

Nota: Don't worry if you don't understand all the details of this example immediately. We'll cover using third party APIs in a lot more detail in a future article.

When using an API, you should make sure you know where the entry point is for the API. In The Geolocation API, this is pretty simple — it is the Navigator.geolocation property, which returns the browser's Geolocation object that all the useful geolocation methods are available inside.

The Document Object Model (DOM) API has an even simpler entry point — its features tend to be found hanging off the Document object, or an instance of an HTML element that you want to affect in some way, for example:

Other APIs have slightly more complex entry points, often involving creating a specific context for the API code to be written in. For example, the Canvas API's context object is created by getting a reference to the <canvas> element you want to draw on, and then calling its HTMLCanvasElement.getContext() method:

Anything that we want to do to the canvas is then achieved by calling properties and methods of the content object (which is an instance of CanvasRenderingContext2D), for example:

Nota: You can see this code in action in our bouncing balls demo (see it running live also).

We already discussed events earlier on in the course, in our Introduction to events article — this article looks in detail at what client-side web events are and how they are used in your code. If you are not already familiar with how client-side web API events work, you should go and read this article first before continuing.

Some web APIs contain no events, but some contain a number of events. The handler properties that allow us to run functions when events fire are generally listed in our reference material in separate "Event handlers" sections. As a simple example, instances of the XMLHttpRequest object (each one represents an HTTP request to the server to retrieve a new resource of some kind) have a number of events available on them, for example the load event is fired when a response has been successfully returned containing the requested resource, and it is now available.

Nota: You can see this code in action in our ajax.html example (see it live also).

The first five lines specify the location of resource we want to fetch, create a new instance of a request object using the XMLHttpRequest() constructor, open an HTTP GET request to retrieve the specified resource, specify that the response should be sent in JSON format, then send the request.

The onload handler function then specifies what we do with the response. We know the response will be successfully returned and available after the load event has required (unless an error occurred), so we save the response containing the returned JSON in the superHeroes variable, then pass it to two different functions for further processing.

WebAPI features are subject to the same security considerations as JavaScript and other web technologies (for example same-origin policy (en-US)), but they sometimes have additional security mechanisms in place. For example, some of the more modern WebAPIs will only work on pages served over HTTPS due to them transmitting potentially sensitive data (examples include Service Workers and Push).

In addition, some WebAPIs request permission to be enabled from the user once calls to them are made in your code. As an example, you may have noticed a dialog like the following when loading up our earlier Geolocation example:

The Notifications API (en-US) asks for permission in a similar fashion:

These permission prompts are given to users for security — if they weren't in place, then sites could start secretly tracking your location without you knowing it, or spamming you with a lot of annoying notifications.

This page was last modified on 13 de dez. de 2022 by MDN contributors.