Connection management is a key topic in HTTP: opening and maintaining connections largely impacts the performance of Web sites and Web applications. In HTTP/1.x, there are several models: short-lived connections, persistent connections, and HTTP pipelining.

HTTP mostly relies on TCP for its transport protocol, providing a connection between the client and the server. In its infancy, HTTP used a single model to handle such connections. These connections were short-lived: a new one created each time a request needed sending, and closed once the answer had been received.

This simple model held an innate limitation on performance: opening each TCP connection is a resource-consuming operation. Several messages must be exchanged between the client and the server. Network latency and bandwidth affect performance when a request needs sending. Modern Web pages require many requests (a dozen or more) to serve the amount of information needed, proving this earlier model inefficient.

Two newer models were created in HTTP/1.1. The persistent-connection model keeps connections opened between successive requests, reducing the time needed to open new connections. The HTTP pipelining model goes one step further, by sending several successive requests without even waiting for an answer, reducing much of the latency in the network. 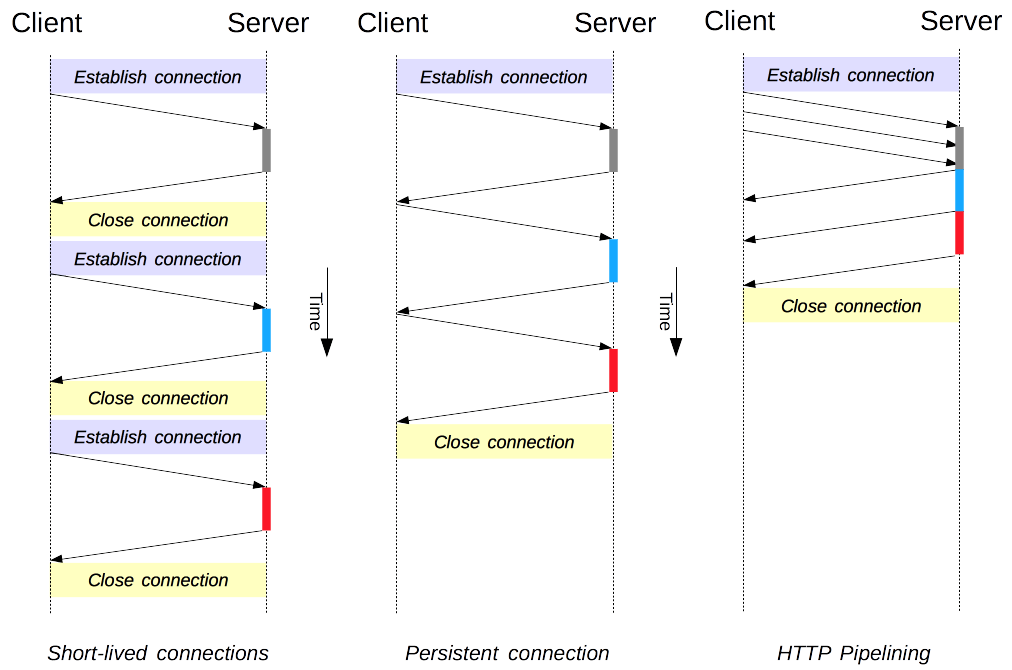 It's important to note that connection management in HTTP applies to the connection between two consecutive nodes, which is hop-by-hop and not end-to-end. The model used in connections between a client and its first proxy may differ from the model between a proxy and the destination server (or any intermediate proxies). The HTTP headers involved in defining the connection model, like Connection and Keep-Alive, are hop-by-hop headers with their values able to be changed by intermediary nodes.

A related topic is the concept of HTTP connection upgrades, wherein an HTTP/1.1 connection is upgraded to a different protocol, such as TLS/1.0, WebSocket, or even HTTP/2 in cleartext. This protocol upgrade mechanism is documented in more detail elsewhere.

The original model of HTTP, and the default one in HTTP/1.0, is short-lived connections. Each HTTP request is completed on its own connection; this means a TCP handshake happens before each HTTP request, and these are serialized.

The TCP handshake itself is time-consuming, but a TCP connection adapts to its load, becoming more efficient with more sustained (or warm) connections. Short-lived connections do not make use of this efficiency feature of TCP, and performance degrades from optimum by persisting to transmit over a new, cold connection.

Note: Unless dealing with a very old system, which doesn't support a persistent connection, there is no compelling reason to use this model.

Short-lived connections have two major hitches: the time taken to establish a new connection is significant, and performance of the underlying TCP connection gets better only when this connection has been in use for some time (warm connection). To ease these problems, the concept of a persistent connection has been designed, even prior to HTTP/1.1. Alternatively this may be called a keep-alive connection.

A persistent connection is one which remains open for a period of time, and can be reused for several requests, saving the need for a new TCP handshake, and utilizing TCP's performance enhancing capabilities. This connection will not stay open forever: idle connections are closed after some time (a server may use the Keep-Alive header to specify a minimum time the connection should be kept open).

Persistent connections also have drawbacks; even when idling they consume server resources, and under heavy load, DoS attacks can be conducted. In such cases, using non-persistent connections, which are closed as soon as they are idle, can provide better performance.

HTTP/1.0 connections are not persistent by default. Setting Connection to anything other than close, usually retry-after, will make them persistent.

In HTTP/1.1, persistence is the default, and the header is no longer needed (but it is often added as a defensive measure against cases requiring a fallback to HTTP/1.0).

Note: HTTP pipelining is not activated by default in modern browsers:

For these reasons, pipelining has been superseded by a better algorithm, multiplexing, that is used by HTTP/2.

By default, HTTP requests are issued sequentially. The next request is only issued once the response to the current request has been received. As they are affected by network latencies and bandwidth limitations, this can result in significant delay before the next request is seen by the server.

Pipelining is the process to send successive requests, over the same persistent connection, without waiting for the answer. This avoids latency of the connection. Theoretically, performance could also be improved if two HTTP requests were to be packed into the same TCP message. The typical MSS (Maximum Segment Size), is big enough to contain several simple requests, although the demand in size of HTTP requests continues to grow.

Not all types of HTTP requests can be pipelined: only idempotent methods, that is GET, HEAD, PUT and DELETE, can be replayed safely. Should a failure happen, the pipeline content can be repeated.

Today, every HTTP/1.1-compliant proxy and server should support pipelining, though many have limitations in practice: a significant reason no modern browser activates this feature by default.

Note: Unless you have a very specific immediate need, don't use this deprecated technique; switch to HTTP/2 instead. In HTTP/2, domain sharding is no longer useful: the HTTP/2 connection is able to handle parallel unprioritized requests very well. Domain sharding is even detrimental to performance. Most HTTP/2 implementations use a technique called connection coalescing to revert eventual domain sharding.

As an HTTP/1.x connection is serializing requests, even without any ordering, it can't be optimal without large enough available bandwidth. As a solution, browsers open several connections to each domain, sending parallel requests. Default was once 2 to 3 connections, but this has now increased to a more common use of 6 parallel connections. There is a risk of triggering DoS protection on the server side if attempting more than this number. 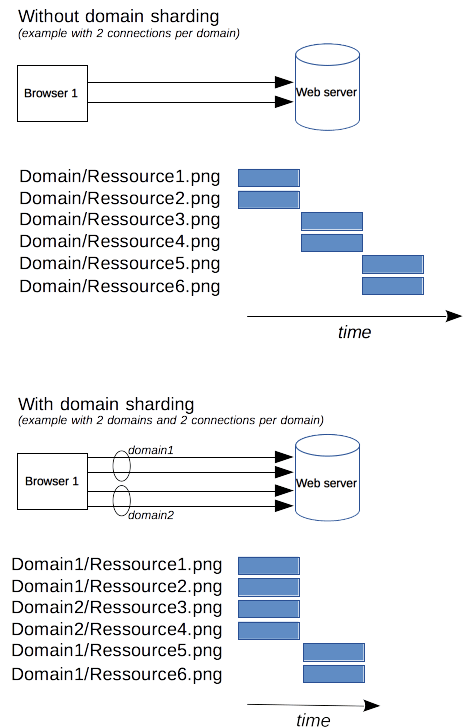 This page was last modified on Dec 12, 2022 by MDN contributors.