Getting started with HTML

In this article we cover the absolute basics of HTML. To get you started, this article defines elements, attributes, and all the other important terms you may have heard. It also explains where these fit into HTML. You will learn how HTML elements are structured, how a typical HTML page is structured, and other important basic language features. Along the way, there will be an opportunity to play with HTML too!

HTML (Hypertext Markup Language) is not a programming language. It is a markup language that tells web browsers how to structure the web pages you visit. It can be as complicated or as simple as the web developer wants it to be. HTML consists of a series of elements, which you use to enclose, wrap, or mark up different parts of content to make it appear or act in a certain way. The enclosing tags can make content into a hyperlink to connect to another page, italicize words, and so on.  For example, consider the following line of text:

If we wanted the text to stand by itself, we could specify that it is a paragraph by enclosing it in a paragraph  (<p>) element:

Note: Tags in HTML are case-insensitive. This means they can be written in uppercase or lowercase. For example, a <title> tag could be written as <title>, <TITLE>, <Title>, <TiTlE>, etc., and it will work. However, it is best practice to write all tags in lowercase for consistency and readability.

Let's further explore our paragraph element from the previous section:

The anatomy of our element is:

If you make a mistake, you can clear your work using the Reset button. If you get really stuck, press the Show solution button to see the answer.

Elements can be placed within other elements. This is called nesting. If we wanted to state that our cat is very grumpy, we could wrap the word very in a <strong> element, which means that the word is to have strong(er) text formatting:

The following is an example of the wrong way to do nesting:

The tags have to open and close in a way that they are inside or outside one another. With the kind of overlap in the example above, the browser has to guess at your intent. This kind of guessing can result in unexpected results.

There are two important categories of elements to know in HTML: block-level elements and inline elements.

<em> is an inline element. As you see below, the first three elements sit on the same line, with no space in between. On the other hand, <p> is a block-level element. Each p element appears on a new line, with space above and below. (The spacing is due to default CSS styling that the browser applies to paragraphs.)

Note: HTML5 redefined the element categories: see Element content categories. While these definitions are more accurate and less ambiguous than their predecessors, the new definitions are a lot more complicated to understand than block and inline. This article will stay with these two terms.

Note: The terms block and inline, as used in this article, should not be confused with the types of CSS boxes that have the same names. While the names correlate by default, changing the CSS display type doesn't change the category of the element, and doesn't affect which elements it can contain and which elements it can be contained in. One reason HTML5 dropped these terms was to prevent this rather common confusion.

Not all elements follow the pattern of an opening tag, content, and a closing tag. Some elements consist of a single tag, which is typically used to insert/embed something in the document. For example, the <img> element embeds an image file onto a page:

This would output the following:

Elements can also have attributes. Attributes look like this:

Attributes contain extra information about the element that won't appear in the content. In this example, the class attribute is an identifying name used to target the element with style information.

An attribute should have:

Another example of an element is <a>. This stands for anchor. An anchor can make the text it encloses into a hyperlink. Anchors can take a number of attributes, but several are as follows:

Edit the line below in the Input area to turn it into a link to your favorite website.

You'll be able to see your changes update live in the Output area. You should see a link—that when hovered over—displays the value of the title attribute, and when clicked, navigates to the web address in the href attribute. Remember that you need to include a space between the element name, and between each attribute.

If you make a mistake, you can always reset it using the Reset button. If you get really stuck, press the Show solution button to see the answer.

Sometimes you will see attributes written without values. This is entirely acceptable. These are called Boolean attributes. Boolean attributes can only have one value, which is generally the same as the attribute name. For example, consider the disabled attribute, which you can assign to form input elements. (You use this to disable the form input elements so the user can't make entries. The disabled elements typically have a grayed-out appearance.) For example:

As shorthand, it is acceptable to write this as follows:

If you look at code for a lot of other sites, you might come across a number of strange markup styles, including attribute values without quotes. This is permitted in certain circumstances, but it can also break your markup in other circumstances. For example, if we revisit our link example from earlier, we could write a basic version with only the href attribute, like this:

However, as soon as we add the title attribute in this way, there are problems:

As written above, the browser misinterprets the markup, mistaking the title attribute for three attributes:  a title attribute with the value The, and two Boolean attributes, Mozilla and homepage. Obviously, this is not intended! It will cause errors or unexpected behavior, as you can see in the live example below. Try hovering over the link to view the title text!

Always include the attribute quotes. It avoids such problems, and results in more readable code.

In this article you will also notice that the attributes are wrapped in double quotes. However, you might see single quotes in some HTML code. This is a matter of style. You can feel free to choose which one you prefer. Both of these lines are equivalent:

Make sure you don't mix single quotes and double quotes. This example (below) shows a kind of mixing quotes that will go wrong:

To use quote marks inside other quote marks of the same type (single quote or double quote), use HTML entities. For example, this will break:

Instead, you need to do this:

Individual HTML elements aren't very useful on their own. Next, let's examine how individual elements combine to form an entire HTML page:

Active learning: Adding some features to an HTML document

If you want to experiment with writing some HTML on your local computer, you can:

Note: You can also find this basic HTML template on the MDN Learning Area Github repo. 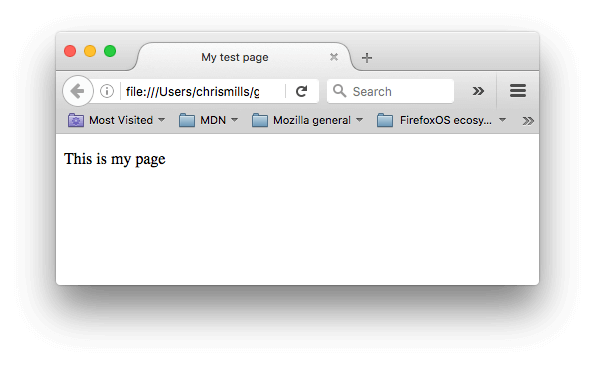 In this exercise, you can edit the code locally on your computer, as described previously, or you can edit it in the sample window below (the editable sample window represents just the contents of the <body> element, in this case). Sharpen your skills by implementing the following tasks:

If you make a mistake, you can always reset it using the Reset button. If you get really stuck, press the Show solution button to see the answer.

In the examples above, you may have noticed that a lot of whitespace is included in the code. This is optional. These two code snippets are equivalent:

No matter how much whitespace you use inside HTML element content (which can include one or more space character, but also line breaks), the HTML parser reduces each sequence of whitespace to a single space when rendering the code. So why use so much whitespace? The answer is readability.

It can be easier to understand what is going on in your code if you have it nicely formatted. In our HTML we've got each nested element indented by two spaces more than the one it is sitting inside. It is up to you to choose the style of formatting (how many spaces for each level of indentation, for example), but you should consider formatting it.

In HTML, the characters <, >,",' and & are special characters. They are parts of the HTML syntax itself. So how do you include one of these special characters in your text? For example, if you want to use an ampersand or less-than sign, and not have it interpreted as code.

The character reference equivalent could be easily remembered because the text it uses can be seen as less than for '&lt;' , quotation for ' &quot; ' and similarly for others. To find more about entity reference, see List of XML and HTML character entity references (Wikipedia).

In the example below, there are two paragraphs:

In the live output below, you can see that the first paragraph has gone wrong. The browser interprets the second instance of <p> as starting a new paragraph. The second paragraph looks fine because it has angle brackets with character references.

Note: You don't need to use entity references for any other symbols, as modern browsers will handle the actual symbols just fine as long as your HTML's character encoding is set to UTF-8.

HTML has a mechanism to write comments in the code. Browsers ignore comments, effectively making comments invisible to the user. The purpose of comments is to allow you to include notes in the code to explain your logic or coding. This is very useful if you return to a code base after being away for long enough that you don't completely remember it. Likewise, comments are invaluable as different people are making changes and updates.

As you can see below, only the first paragraph displays in the live output.

You made it to the end of the article! We hope you enjoyed your tour of the basics of HTML.

At this point, you should understand what HTML looks like, and how it works at a basic level. You should also be able to write a few elements and attributes. The subsequent articles of this module go further on some of the topics introduced here, as well as presenting other concepts of the language.

Note: As you start to learn more about HTML, consider learning the basics of Cascading Style Sheets, or CSS. CSS is the language used to style web pages. (for example, changing fonts or colors, or altering the page layout) HTML and CSS work well together, as you will soon discover.