You've also seen a lot of custom functions in the course so far — functions defined in your code, not inside the browser. Anytime you saw a custom name with parentheses straight after it, you were using a custom function. In our random-canvas-circles.html example (see also the full source code) from our loops article, we included a custom draw() function that looked like this:

This function draws 100 random circles inside an <canvas> element. Every time we want to do that, we can just invoke the function with this

rather than having to write all that code out again every time we want to repeat it. And functions can contain whatever code you like — you can even call other functions from inside functions. The above function for example calls the random() function three times, which is defined by the following code:

You are probably clear on this by now, but just in case ... to actually use a function after it has been defined, you've got to run — or invoke — it. This is done by including the name of the function in the code somewhere, followed by parentheses.

You may see functions defined and invoked in slightly different ways. So far we have just created a function like so:

But you can also create a function that doesn't have a name:

The above example would require there to be a <button> element available on the page to select and click. You've already seen this structure a few times throughout the course, and you'll learn more about and see it in use in the next article.

You can also assign an anonymous function to be the value of a variable, for example:

This function could now be invoked using:

This effectively gives the function a name; you can also assign the function to be the value of multiple variables, for example:

This function could now be invoked using either of

But this would just be confusing, so don't do it! When creating functions, it is better to just stick to this form:

You will mainly use anonymous functions to just run a load of code in response to an event firing — like a button being clicked — using an event handler. Again, this looks something like this:

Some functions require parameters to be specified when you are invoking them — these are values that need to be included inside the function parentheses, which it needs to do its job properly.

備註： Parameters are sometimes called arguments, properties, or even attributes.

As an example, the browser's built-in Math.random() function doesn't require any parameters. When called, it always returns a random number between 0 and 1:

備註： When you need to specify multiple parameters, they are separated by commas.

It should also be noted that sometimes parameters are optional — you don't have to specify them. If you don't, the function will generally adopt some kind of default behavior. As an example, the array join() function's parameter is optional:

If no parameter is included to specify a joining/delimiting character, a comma is used by default.

JavaScript is set up like this for various reasons — but mainly because of security and organization. Sometimes you don't want variables to be accessible from everywhere in the code — external scripts that you call in from elsewhere could start to mess with your code and cause problems because they happen to be using the same variable names as other parts of the code, causing conflicts. This might be done maliciously, or just by accident.

For example, say you have an HTML file that is calling in two external JavaScript files, and both of them have a variable and a function defined that use the same name:

Both functions you want to call are called greeting(), but you can only ever access the second.js file's greeting() function — it is applied to the HTML later on in the source code, so its variable and function overwrite the ones in first.js.

備註： You can see this example running live on GitHub (see also the source code).

Keeping parts of your code locked away in functions avoids such problems, and is considered best practice.

It is a bit like a zoo. The lions, zebras, tigers, and penguins are kept in their own enclosures, and only have access to the things inside their enclosures — in the same manner as the function scopes. If they were able to get into other enclosures, problems would occur. At best, different animals would feel really uncomfortable inside unfamiliar habitats — a lion or tiger would feel terrible inside the penguins' watery, icy domain. At worst, the lions and tigers might try to eat the penguins! 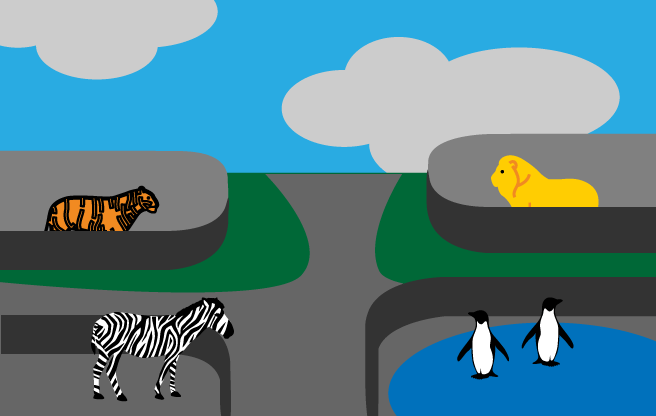 The zoo keeper is like the global scope — he or she has the keys to access every enclosure, to restock food, tend to sick animals, etc.

Let's look at a real example to demonstrate scoping.

備註： The ReferenceError: "x" is not defined error is one of the most common you'll encounter. If you get this error and you are sure that you have defined the variable in question, check what scope it is in.

Keep in mind that you can call a function from anywhere, even inside another function. This is often used as a way to keep code tidy — if you have a big complex function, it is easier to understand if you break it down into several sub-functions:

This page was last modified on 2023年1月30日 by MDN contributors.