Draft: This page is not complete.

This article describes how the various WebRTC-related protocols interact with one another in order to create a connection and transfer data and/or media among peers.

Note: This page needs heavy rewriting for structural integrity and content completeness. Lots of info here is good but the organization is a mess since this is sort of a dumping ground right now.

Unfortunately, WebRTC can’t create connections without some sort of server in the middle. We call this the signal channel or signaling service. It’s any sort of channel of communication to exchange information before setting up a connection, whether by email, post card or a carrier pigeon... it’s up to you.

The information we need to exchange is the Offer and Answer which just contains the SDP mentioned below.

The configuration of an endpoint on a WebRTC connection is called a session description. The description includes information about the kind of media being sent, its format, the transfer protocol being used, the endpoint's IP address and port, and other information needed to describe a media transfer endpoint. This information is exchanged and stored using Session Description Protocol (SDP); if you want details on the format of SDP data, you can find it in RFC 2327.

When a user starts a WebRTC call to another user, a special description is created called an offer. This description includes all the information about the caller's proposed configuration for the call. The recipient then responds with an answer, which is a description of their end of the call. In this way, both devices share with one another the information needed in order to exchange media data. This exchange is handled using Interactive Connectivity Establishment (ICE), a protocol which lets two devices use an intermediary to exchange offers and answers even if the two devices are separated by Network Address Translation (NAT).

The offer/answer process is performed both when a call is first established, but also any time the call's format or other configuration needs to change. Regardless of whether it's a new call, or reconfiguring an existing one, these are the basic steps which must occur to exchange the offer and answer, leaving out the ICE layer for the moment:

Taking one step deeper into the process, we find that localDescription and remoteDescription, the properties which return these two descriptions, aren't as simple as they look. Because during renegotiation, an offer might be rejected because it proposes an incompatible format, it's necessary that each endpoint have the ability to propose a new format but not actually switch to it until it's accepted by the other peer. For that reason, WebRTC uses pending and current descriptions.

See the individual articles on these properties and methods for more specifics, and Codecs used by WebRTC for information about codecs supported by WebRTC and which are compatible with which browsers. The codecs guide also offers guidance to help you choose the best codecs for your needs.

As well as exchanging information about the media (discussed above in Offer/Answer and SDP), peers must exchange information about the network connection. This is known as an ICE candidate and details the available methods the peer is able to communicate (directly or through a TURN server). Typically, each peer will propose its best candidates first, making their way down the line toward their worse candidates. Ideally, candidates are UDP (since it's faster, and media streams are able to recover from interruptions relatively easily), but the ICE standard does allow TCP candidates as well.

Note: Generally, ICE candidates using TCP are only going to be used when UDP is not available or is restricted in ways that make it not suitable for media streaming. Not all browsers support ICE over TCP, however.

ICE allows candidates to represent connections over either TCP or UDP, with UDP generally being preferred (and being more widely supported). Each protocol supports a few types of candidate, with the candidate types defining how the data makes its way from peer to peer.

UDP candidates (candidates with their protocol set to udp) can be one of these types:

A host candidate is one for which its ip address is the actual, direct IP address of the remote peer.

A peer reflexive candidate is one whose IP address comes from a symmetric NAT between the two peers, usually as an additional candidate during trickle ICE (that is, additional candidate exchanges that occur after primary signaling but before the connection verification phase is finished).

A relay candidate is generated just like a server reflexive candidate ("srflx"), but using TURN instead of STUN.

TCP candidates (that is, candidates whose protocol is tcp) can be of these types:

The transport will try to open an outbound connection but won't receive incoming connection requests. This is the most common type, and the only one that most user agents will gather.

The transport will receive incoming connection attempts but won't attempt a connection itself.

The transport will try to simultaneously open a connection with its peer.

The ICE layer selects one of the two peers to serve as the controlling agent. This is the ICE agent which will make the final decision as to which candidate pair to use for the connection. The other peer is called the controlled agent. You can identify which one your end of the connection is by examining the value of RTCIceCandidate.transport.role, although in general it doesn't matter which is which.

It's important to keep in mind that a single ICE session may result in the controlling agent choosing more than one candidate pair. Each time it does so and shares that information with the controlled agent, the two peers reconfigure their connection to use the new configuration described by the new candidate pair.

Once the ICE session is complete, the configuration that's currently in effect is the final one, unless an ICE reset occurs.

At the end of each generation of candidates, an end-of-candidates notification is sent in the form of an RTCIceCandidate whose candidate property is an empty string. This candidate should still be added to the connection using addIceCandidate() method, as usual, in order to deliver that notification to the remote peer.

When there are no more candidates at all to be expected during the current negotiation exchange, an end-of-candidates notification is sent by delivering a RTCIceCandidate whose candidate property is null. This message does not need to be sent to the remote peer. It's a legacy notification of a state which can be detected instead by watching for the iceGatheringState to change to complete, by watching for the icegatheringstatechange event.

During negotiation, there will be times when things just don't work out. For example, when renegotiating a connection—for example, to adapt to changing hardware or network configurations—it's possible that negotiation could reach a dead end, or some form of error might occur that prevents negotiation at all. There may be permissions issues or other problems as well, for that matter.

When renegotiating a connection that's already active and a situation arises in which the negotiation fails, you don't really want to kill the already-running call. After all, you were most likely just trying to upgrade or downgrade the connection, or to otherwise make adaptations to an ongoing session. Aborting the call would be an excessive reaction in that situation.

To programmatically initiate a rollback, send a description whose type is rollback. Any other properties in the description object are ignored.

For now, see ICE restart in Lifetime of a WebRTC session.

The entire exchange in a complicated diagram 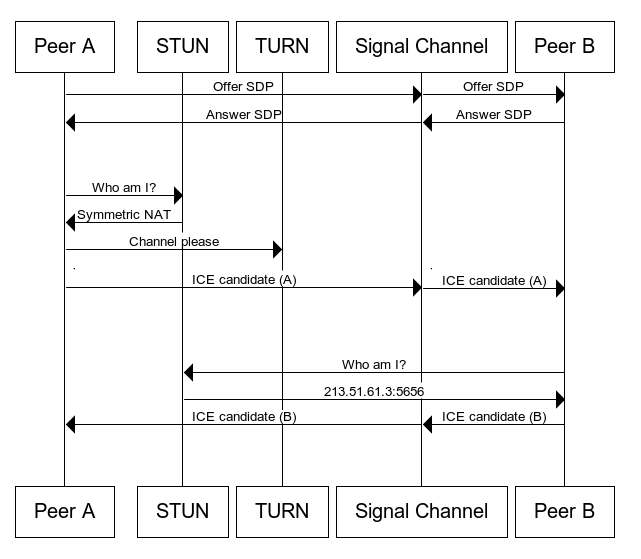