The Streams API adds a very useful set of tools to the web platform, providing objects allowing JavaScript to programmatically access streams of data received over the network and process them as desired by the developer. Some of the concepts and terminology associated with streams might be new to you — this article explains all you need to know.

A readable stream is a data source represented in JavaScript by a ReadableStream object that flows from an underlying source — this is a resource somewhere on the network or elsewhere on your domain that you want to get data from.

There are two types of underlying source:

The data is read sequentially in small pieces called chunks. A chunk can be a single byte, or it can be something larger such as a typed array of a certain size. A single stream can contain chunks of different sizes and types.

The chunks placed in a stream are said to be enqueued — this means they are waiting in a queue ready to be read. An internal queue keeps track of the chunks that have not yet been read (see the Internal queues and queuing strategies section below).

The chunks inside the stream are read by a reader — this processes the data one chunk at a time, allowing you to do whatever kind of operation you want to do on it. The reader plus the other processing code that goes along with it is called a consumer.

There is also a construct you’ll use called a controller — each reader has an associated controller that allows you to control the stream (for example, to close it if wished).

Only one reader can read a stream at a time; when a reader is created and starts reading a stream (an active reader), we say it is locked to it. If you want another reader to start reading your stream, you typically need to cancel the first reader before you do anything else (although you can tee streams, see the Teeing section below)

Note that there are two different types of readable stream. As well as the conventional readable stream there is a type called a byte stream — this is an extended version of a conventional stream for reading underlying byte sources. Compared with the conventional readable stream, byte streams are allowed to be read by BYOB readers (BYOB, "bring your own buffer"). This kind of reader allows streams to be read straight into a buffer supplied by the developer, minimizing the copying required. Which underlying stream (and by extension, reader and controller) your code will use depends on how the stream was created in the first place (see the ReadableStream() constructor page).

Warning: Byte streams are not implemented anywhere as yet, and questions have been raised as to whether the spec details are in a finished enough state for them to be implemented. This may change over time.

You can make use of ready-made readable streams via mechanisms like a Response.body from a fetch request, or roll your own streams using the ReadableStream() constructor.

Even though only a single reader can read a stream at once, it is possible to split a stream into two identical copies, which can then be read by two separate readers. This is called teeing.

In JavaScript, this is achieved via the ReadableStream.tee() method — it outputs an array containing two identical copies of the original readable stream, which can then be read independently by two separate readers. 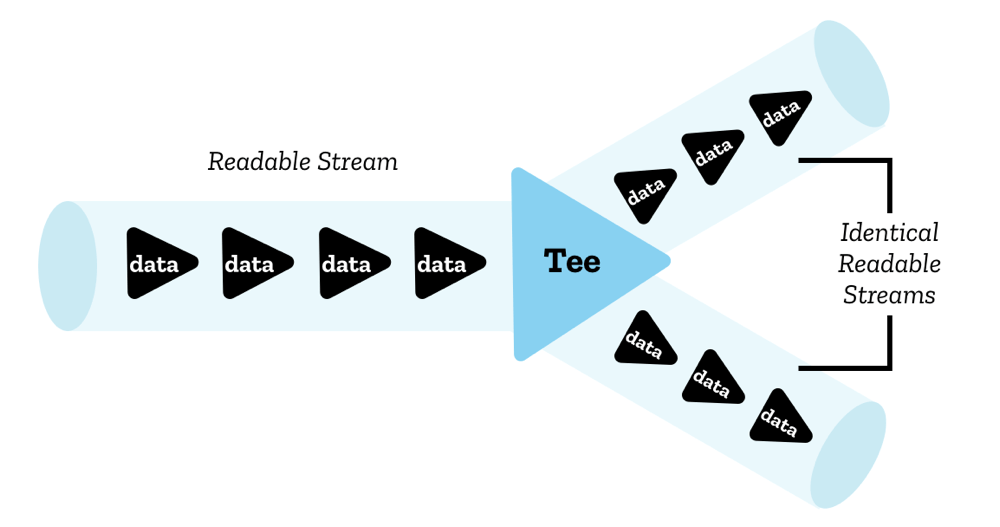 A writable stream is a destination into which you can write data, represented in JavaScript by a WritableStream object. This serves as an abstraction over the top of an underlying sink — a lower-level I/O sink into which raw data is written.

The data is written to the stream via a writer, one chunk at a time. A chunk can take a multitude of forms, just like the chunks in a reader. You can use whatever code you like to produce the chunks ready for writing; the writer plus the associated code is called a producer.

When a writer is created and starts writing to a stream (an active writer), it is said to be locked to it. Only one writer can write to a writable stream at one time. If you want another writer to start writing to your stream, you typically need to abort it before you then attach another writer to it.

An internal queue keeps track of the chunks that have been written to the stream but not yet been processed by the underlying sink.

There is also a construct you’ll use called a controller — each writer has an associated controller that allows you to control the stream (for example, to abort it if wished).

You can make use of writable streams using the WritableStream() constructor. These currently have very limited availability in browsers.

The Streams API makes it possible to pipe streams into one another (or at least it will do when browsers implement the relevant functionality) using a structure called a pipe chain. There are two methods available in the spec to facilitate this:

Note: This functionality isn't fully thought through yet, or available in many browsers. At some point the spec writers hope to add something like a TransformStream class to make creating transform streams easier.

An important concept in streams is backpressure — this is the process by which a single stream or a pipe chain regulates the speed of reading/writing. When a stream later in the chain is still busy and isn't yet ready to accept more chunks, it sends a signal backwards through the chain to tell earlier transform streams (or the original source) to slow down delivery as appropriate so that you don't end up with a bottleneck anywhere.

If later on the consumer again wants to receive data, we can use the pull method in the stream creation to tell our underlying source to feed our stream with data.

As mentioned earlier, the chunks in a stream that have not yet been processed and finished with are kept track of by an internal queue.

Internal queues employ a queuing strategy, which dictates how to signal backpressure based on the internal queue state.

In general, the strategy compares the size of the chunks in the queue to a value called the high water mark, which is the largest total chunk size that the queue can realistically manage.

The calculation performed is

The desired size is the size of chunks the stream can still accept to keep the stream flowing but below the high water mark in size. After the calculation is performed, chunk generation will be slowed down/sped up as appropriate to keep the stream flowing as fast as possible while keeping the desired size above zero. If the value falls to zero (or below in the case of writable streams), it means that chunks are being generated faster than the stream can cope with, which results in problems.

Note: What happens in the case of zero or negative desired size hasn’t really been defined in the spec so far. Patience is a virtue.

As an example, let's take a chunk size of 1, and a high water mark of 3. This means that up to 3 chunks can be enqueued before the high water mark is reached and backpressure is applied.