This second article in our Django Tutorial shows how you can create a "skeleton" website project as a basis, which you can then populate with site-specific settings, paths, models, views, and templates.

This article shows how you can create a "skeleton" website, which you can then populate with site-specific settings, paths, models, views, and templates (we discuss these in later articles).

For the Local Library website, the website and project folders are named locallibrary, and includes one application named catalog. The top-level folder structure will therefore be as follows:

The following sections discuss the process steps in detail, and show how you can test your changes. At the end of this article, we discuss other site-wide configuration you might also do at this stage.

The django-admin tool creates a folder/file structure as follows:

Our current working directory should look something like this:

The locallibrary project sub-folder is the entry point for the website:

The manage.py script is used to create applications, work with databases, and start the development web server.

Next, run the following command to create the catalog application that will live inside our locallibrary project. Make sure to run this command from the same folder as your project's manage.py:

Note: The example command is for Linux/macOS X. On Windows, the command should be:

If you're working on Windows, replace python3 with py -3 throughout this module.

If you are using Python 3.7.0 or later, you should only use  py manage.py startapp catalog

The tool creates a new folder and populates it with files for the different parts of the application (shown in the following example). Most of the files are named after their purpose (e.g. views should be stored in views.py, models in models.py, tests in tests.py, administration site configuration in admin.py, application registration in apps.py) and contain some minimal boilerplate code for working with the associated objects.

The updated project directory should now look like this:

In addition we now have:

Note: Have you noticed what is missing from the files list above? While there is a place for your views and models, there is nowhere for you to put your url mappings, templates, and static files. We'll show you how to create them further along (these aren't needed in every website but they are needed in this example).

Now that the application has been created, we have to register it with the project so that it will be included when any tools are run (like adding models to the database for example). Applications are registered by adding them to the INSTALLED_APPS list in the project settings.

Open the project settings file, django_projects/locallibrary/locallibrary/settings.py, and find the definition for the INSTALLED_APPS list. Then add a new line at the end of the list, as shown below:

The new line specifies the application configuration object (CatalogConfig) that was generated for you in /locallibrary/catalog/apps.py when you created the application.

Note: You'll notice that there are already a lot of other INSTALLED_APPS (and MIDDLEWARE, further down in the settings file). These enable support for the Django administration site and the functionality it uses (including sessions, authentication, etc).

This is also the point where you would normally specify the database to be used for the project. It makes sense to use the same database for development and production where possible, in order to avoid minor differences in behavior.  You can find out about the different options in Databases (Django docs).

We'll use the SQLite database for this example, because we don't expect to require a lot of concurrent access on a demonstration database, and it requires no additional work to set up! You can see how this database is configured in settings.py:

Because we are using SQLite, we don't need to do any further setup here. Let's move on!

The settings.py file is also used for configuring a number of other settings, but at this point, you probably only want to change the TIME_ZONE — this should be made equal to a string from the standard List of tz database time zones (the TZ column in the table contains the values you want). Change your TIME_ZONE value to one of these strings appropriate for your time zone, for example:

There are two other settings you won't change now, but that you should be aware of:

Hooking up the URL mapper

The website is created with a URL mapper file (urls.py) in the project folder. While you can use this file to manage all your URL mappings, it is more usual to defer mappings to the associated application.

Open locallibrary/locallibrary/urls.py and note the instructional text which explains some of the ways to use the URL mapper.

The URL mappings are managed through the urlpatterns variable, which is a Python list of path() functions. Each path() function either associates a URL pattern to a specific view, which will be displayed when the pattern is matched, or with another list of URL pattern testing code (in this second case, the pattern becomes the "base URL" for patterns defined in the target module). The urlpatterns list initially defines a single function that maps all URLs with the pattern admin/ to the module admin.site.urls , which contains the Administration application's own URL mapping definitions.

Note: The route in path() is a string defining a URL pattern to match. This string might include a named variable (in angle brackets), e.g. 'catalog/<id>/'. This pattern will match a URL like /catalog/*any_chars*/ and pass any_chars to the view as a string with parameter name id. We discuss path methods and route patterns further in later topics.

To add a new list item to the urlpatterns list, add the following lines to the bottom of the file. This new item includes a path() that forwards requests with the pattern catalog/ to the module catalog.urls (the file with the relative URL catalog/urls.py).

Note: Note that we included the import line (from django.urls import include) with the code that uses it (so it is easy to see what we've added), but it is common to include all your import lines at the top of a Python file.

Add the following lines to the bottom of the file:

Django does not serve static files like CSS, JavaScript, and images by default, but it can be useful for the development web server to do so while you're creating your site. As a final addition to this URL mapper, you can enable the serving of static files during development by appending the following lines.

Add the following final block to the bottom of the file now:

Note: There are a number of ways to extend the urlpatterns list (previously, we just appended a new list item using the += operator to clearly separate the old and new code). We could have instead just included this new pattern-map in the original list definition:

As a final step, create a file inside your catalog folder called urls.py, and add the following text to define the (empty) imported urlpatterns. This is where we'll add our patterns as we build the application.

At this point we have a complete skeleton project. The website doesn't actually do anything yet, but it's worth running it to make sure that none of our changes have broken anything.

Before we do that, we should first run a database migration. This updates our database (to include any models in our installed applications) and removes some build warnings.

Django uses an Object-Relational-Mapper (ORM) to map model definitions in the Django code to the data structure used by the underlying database. As we change our model definitions, Django tracks the changes and can create database migration scripts (in /locallibrary/catalog/migrations/) to automatically migrate the underlying data structure in the database to match the model.

When we created the website, Django automatically added a number of models for use by the admin section of the site (which we'll look at later). Run the following commands to define tables for those models in the database (make sure you are in the directory that contains manage.py):

Warning: You'll need to run these commands every time your models change in a way that will affect the structure of the data that needs to be stored (including both addition and removal of whole models and individual fields).

The makemigrations command creates (but does not apply) the migrations for all applications installed in your project. You can specify the application name as well to just run a migration for a single project. This gives you a chance to check out the code for these migrations before they are applied. If you're a Django expert, you may choose to tweak them slightly!

The migrate command is what applies the migrations to your database. Django tracks which ones have been added to the current database.

During development, you can serve the website first using the development web server, and then viewing it on your local web browser.

Note: The development web server is not robust or performant enough for production use, but it is a very easy way to get your Django website up and running during development to give it a convenient quick test. By default it will serve the site to your local computer (http://127.0.0.1:8000/), but you can also specify other computers on your network to serve to. For more information see django-admin and manage.py: runserver (Django docs).

Run the development web server by calling the runserver command (in the same directory as manage.py):

Once the server is running, you can view the site by navigating to http://127.0.0.1:8000/ in your local web browser. You should see a site error page that looks like this: 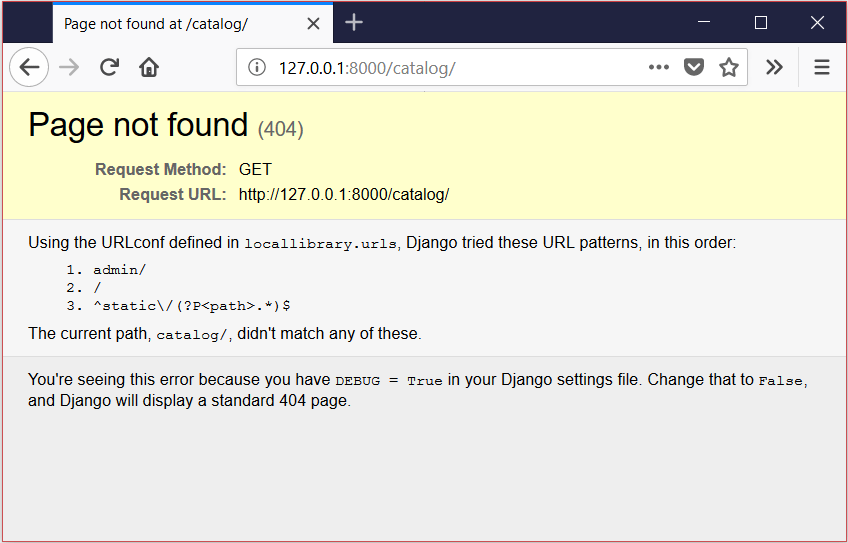 Don't worry! This error page is expected because we don't have any pages/urls defined in the catalog.urls module (which we're redirected to when we get a URL to the root of the site).

Note: The example page demonstrates a great Django feature — automated debug logging. Whenever a page cannot be found, Django displays an error screen with useful information or any error raised by the code. In this case, we can see that the URL we've supplied doesn't match any of our URL patterns (as listed). Logging is turned off in production (which is when we put the site live on the Web), in which case a less informative but more user-friendly page will be served.

At this point, we know that Django is working!

Note: You should re-run migrations and re-test the site whenever you make significant changes. It doesn't take very long!

The catalog/ directory contains files for the views, models, and other parts of the application. Open these files and inspect the boilerplate.

As you saw previously, a URL-mapping for the Admin site has already been added in the project's urls.py. Navigate to the admin area in your browser and see what happens (you can infer the correct URL from the mapping).

You have now created a complete skeleton website project, which you can go on to populate with urls, models, views, and templates.

Now that the skeleton for the Local Library website is complete and running, it's time to start writing the code that makes this website do what it is supposed to do.