Secure context: This feature is available only in secure contexts (HTTPS), in some or all supporting browsers.

The Notifications API lets a web page or app send notifications that are displayed outside the page at the system level; this lets web apps send information to a user even if the application is idle or in the background. This article looks at the basics of using this API in your own apps. 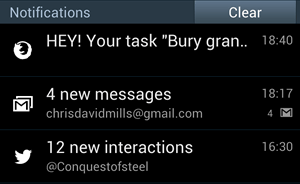 One of the most obvious use cases for web notifications is a web-based mail or IRC application that needs to notify the user when a new message is received, even if the user is doing something else with another application. Many examples of this now exist, such as Slack.

We've written a real world example — a to-do list app — to give more of an idea of how web notifications can be used. It stores data locally using IndexedDB and notifies users when tasks are due using system notifications. Download the To-do list code, or view the app running live.

Before an app can send a notification, the user must grant the application the right to do so. This is a common requirement when an API tries to interact with something outside a web page — at least once, the user needs to specifically grant that application permission to present notifications, thereby letting the user control which apps/sites are allowed to display notifications.

Because of abuses of push notifications in the past, web browsers and developers have begun to implement strategies to help mitigate this problem. You should only request consent to display notifications in response to a user gesture (e.g. clicking a button). This is not only best practice — you should not be spamming users with notifications they didn't agree to — but going forward browsers will explicitly disallow notification permission requests not triggered in response to a user gesture. Firefox is already doing this from version 72, for example, and Safari has done it for some time.

In addition, In Chrome and Firefox you cannot request notifications at all unless the site is a secure context (i.e. HTTPS), and you can no longer allow notification permissions to be requested from cross-origin <iframe>s.

You can check to see if you already have permission by checking the value of the Notification.permission read only property. It can have one of three possible values:

The user hasn't been asked for permission yet, so notifications won't be displayed.

The user has granted permission to display notifications, after having been asked previously.

The user has explicitly declined permission to show notifications.

If permission to display notifications hasn't been granted yet, the application needs to use the Notification.requestPermission() method to request this from the user. In its simplest form, we just include the following:

This uses the promise-based version of the method. If you want to support older versions, you might have to use the older callback version, which looks like this:

The callback version optionally accepts a callback function that is called once the user has responded to the request to display permissions.

In our todo list demo, we include an "Enable notifications" button that, when pressed, requests notification permissions for the app.

Clicking this calls the askNotificationPermission() function:

To avoid duplicating code, we have stored a few bits of housekeeping code inside the handlePermission() function, which is the first main block inside this snippet. Inside here we explicitly set the Notification.permission value (some old versions of Chrome failed to do this automatically), and show or hide the button depending on what the user chose in the permission dialog. We don't want to show it if permission has already been granted, but if the user chose to deny permission, we want to give them the chance to change their mind later on.

Above we said that we had to check whether the browser supports the promise version of Notification.requestPermission(). We did this using the following:

We basically try to see if the .then() method is available on requestPermission(). If so, we move on and return true. If it fails, we return false in the catch() {} block.

For example, in the to-do-list example we use the following snippet to create a notification when required (found inside the createNotification() function):

Used close() to remove a notification that is no longer relevant to the user (e.g. the user already read the notification on the webpage, in the case of a messaging app, or the following song is already playing in a music app to notifies upon song changes). Most modern browsers dismiss notifications automatically after a few moments (around four seconds) but this isn't something you should generally be concerned about as it's up to the user and user agent. The dismissal may also happen at the operating system level and users should remain in control of this. Old versions of Chrome didn't remove notifications automatically so you can do so after a setTimeout() only for those legacy versions in order to not remove notifications from notification trays on other browsers.

Note: This API shouldn't be used just to have the notification removed from the screen after a fixed delay (on modern browsers) since this method will also remove the notification from any notification tray, preventing users from interacting with it after it was initially shown.

Note: When you receive a "close" event, there is no guarantee that it's the user who closed the notification. This is in line with the specification, which states: "When a notification is closed, either by the underlying notifications platform or by the user, the close steps for it must be run."

There are four events that are triggered on the Notification instance:

Triggered when the user clicks on the notification.

Triggered once the notification is closed.

Triggered when the notification is displayed to the user.

These events can be tracked using the onclick, onclose, onerror, and onshow handlers. Because Notification also inherits from EventTarget, it's possible to use the addEventListener() method on it.

It's possible to handle multiple notifications this way:

See the live result below: