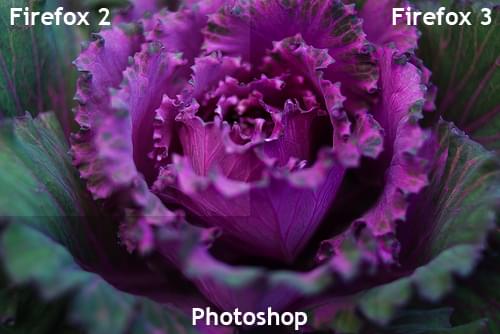 As you can see, Firefox 3 and Photoshop render the image identically, because both support the embedded color correction profile.  Firefox 2 ignores the profile, resulting in mismatched color.

Color correction can be controlled by setting the value of the gfx.color_management.mode preference, as follows:

Full color management means that everything rendered by Firefox, with the exception of plugins, has its colors corrected.

If no path is specified for the color profile, Firefox queries the operating system and uses its configured color profile.

In addition, you can choose to set the value of the gfx.color_management.rendering_intent preference to specify a default rendering intent.  By default, the intent specified by images is ignored, unless you specify -1 for this value.

Note: In Firefox 3.5, perceptual, media-relative, and saturation intents all render the same way.

The new QCMS color management system introduced in Firefox 3.5 currently only supports ICC version 2 color profiles, not version 4. This may result in images being too dark. See bug 488800 and the ICC version 4 profile test.