Note: If you're familiar with the basic concepts of browser extensions, skip this section to see how extension files are put together. Then, use the reference documentation to start building your extension. Visit Firefox Extension Workshop to learn more about the workflow for testing, publishing, and extensions for Firefox.

This article walks through creating an extension for Firefox, from start to finish. The extension adds a red border to any pages loaded from "mozilla.org" or any of its subdomains.

The source code for this example is on GitHub: https://github.com/mdn/webextensions-examples/tree/master/borderify.

Create a new directory and navigate to it. For example, in your command line/terminal you do it like this:

Now create a new file called "manifest.json" directly under the "borderify" directory. Give it the following contents:

Create the "icons" directory directly under the "borderify" directory. Save an icon there named "border-48.png".  You could use the one from our example, which is taken from the Google Material Design iconset, and is used under the terms of the Creative Commons Attribution-ShareAlike license.

If you choose to supply your own icon, It should be 48x48 pixels. You could also supply a 96x96 pixel icon, for high-resolution displays, and if you do this it will be specified as the 96 property of the icons object in manifest.json:

Alternatively, you could supply an SVG file here, and it will be scaled correctly. (Though: if you're using SVG and your icon includes text, you may want to use your SVG editor's "convert to path" tool to flatten the text, so that it scales with a consistent size/position.)

Finally, create a file called "borderify.js" directly under the "borderify" directory. Give it this content:

This script will be loaded into the pages that match the pattern given in the content_scripts manifest.json key. The script has direct access to the document, just like scripts loaded by the page itself.

First, double check that you have the right files in the right places:

In Firefox: Open the about:debugging page, click the This Firefox option, click the Load Temporary Add-on button, then select any file in your extension's directory.

The extension now installs, and remains installed until you restart Firefox.

Alternatively, you can run the extension from the command line using the web-ext tool.

Now visit a page under "mozilla.org", and you should see the red border round the page. 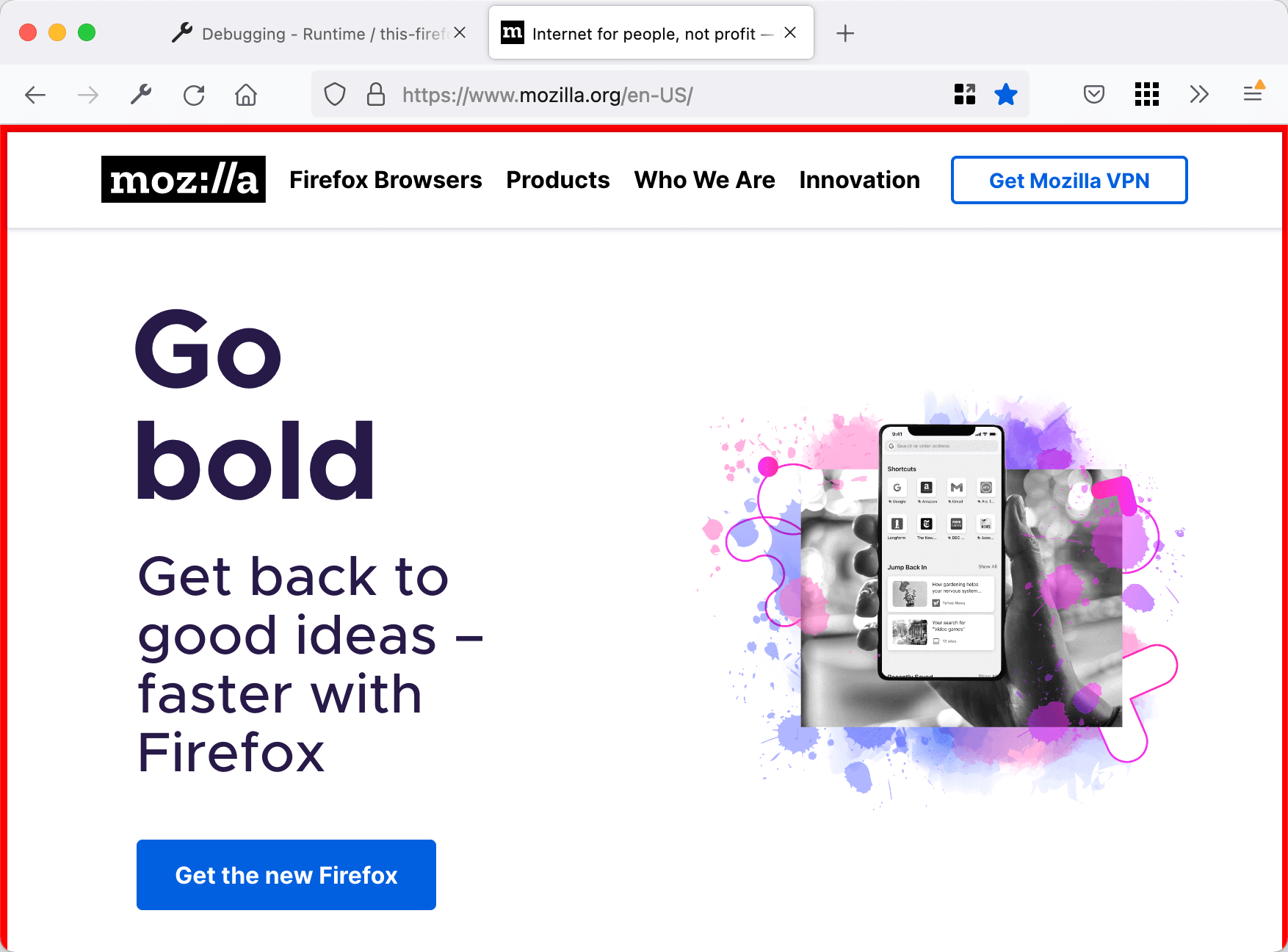 Note: Don't try it on "addons.mozilla.org", though! Content scripts are currently blocked on that domain.

Try experimenting a bit. Edit the content script to change the color of the border, or do something else to the page content. Save the content script, then reload the extension's files by clicking the Reload button in "about:debugging". You can see the changes right away.

For other people to use your extension, you need to package it and submit it to Mozilla for signing. To learn more about that, see "Publishing your extension".

Now you've had an introduction to the process of developing a WebExtension for Firefox: